The perspective of Seed Commons challenges the dominant narrative that the best pathway towards food and nutrition security for the world’s growing population is to foster privately-owned biotechnical innovations, supported by corresponding policy measures (see, for example, OECD 2018). It addresses major political impasses in the present international and national governance of varieties, seed and PGRFA that are based on such narratives and tend to be tailored towards the needs of private sector R&D, large-scale farms and ‘industrial’ food systems, hampering the necessary transition of farming and food systems towards more sustainable outcomes (IPES-Food 2016). By exploring innovative governance models for seed, varieties and PGRFA, Seed Commons could thus provide opportunities to reconsider how innovation could be fostered in a way to better serve current and future needs of farmers and society.

Well that’s exciting. Though I’m a slightly miffed that there was a whole symposium about Seed Commons and nobody told me.

Anyway, check out in particular the paper by Halewood and co-authors, which tries to answer the question: What institutional innovations can enhance farmers’ agency in the evolving global crop commons through use of their specialized knowledge and experience?

Spoiler alert: it’s made-to-measure biocultural community protocols designed to promote farming communities’ access to crop genetic resources from elsewhere1 for experimentation, improvement and management as part of their local production systems. But not only, so read the whole thing. And the other papers too.

Today we’re wishing Tom Payne a very long and happy retirement after over 30 years at CIMMYT, many of the later ones running the wheat genebank.

There’s a nice conversation with him on the WHEAT website.

What is one way we can ensure long-term conservation of staple crops around the world?

In the past few years, several internationally renowned germplasm collections have been destroyed due to civil conflicts, natural disasters and fires — for example in Aleppo, Cape Town and Sao Paulo. Each time, we hear what a shame it was that the destroyed heritage was lost, that it was irreplaceable and beyond value. When a genebank loses an accession, the ancestral lineage extending hundreds of generations becomes permanently extinct. Genebank managers recognize this threat, and hence duplicate samples of all accessions are now slowly being sent to the Global Seed Vault in Svalbard for long-term preservation.

A fond farewell today to Tom Payne, currently the Head of the Wheat Germplasm Collection as he retires after 33+ years at @CIMMYT. Steadfast commitment to & promotion of the many forms of diversity in crops & people globally. Read his recent reflections: https://t.co/CaAhqGRT2J pic.twitter.com/OmzaqUhkPe

If you wanted a nice summary Tom’s legacy you could do worse than look at the recent paper Germplasm Acquisition and Distribution by CGIAR Genebanks, which is now part of a handsome, freely downloadable volume.

The chapter on the Origin of the Domesticated Apples in the recent book on The Apple Genome has a really useful diagram which I hope I won’t get into trouble for reproducing here. 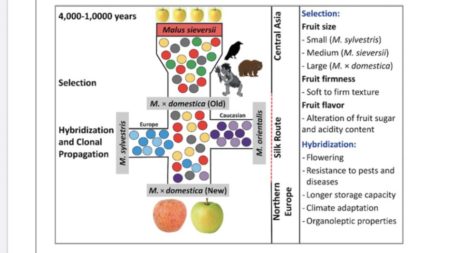 That really is worth a thousand words and more. Wish we had similar ones for all crops.