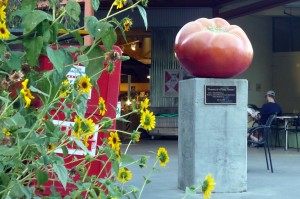 Inspired by Jeremy’s posts on corn statues and tomato experiments in Davis, California, I offer you the “Portrait of a plump tomato”, by Gerald Heffernon. It stands in front of a Davis shop that sells heirloom tomatoes and other agricultural biodiversity (20 rice varieties!). 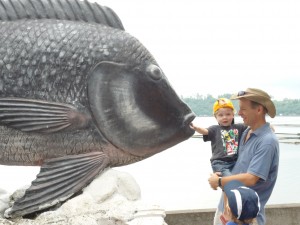 I wonder if the tomato is celebrated here for the many (industrial use) tomato fields in the Davis area. Gerald Heffernon is somewhat of a fruit specialist: he also made apricot, pear, plum and cherry statues, but food statues are rare in the USA and elsewhere. 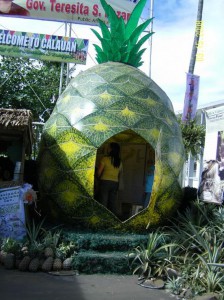 As far as I know, and do correct me if I am wrong, the Philippines is the only country where food gets due respect, and the statues that come with that.

I believe the highest density to be in a small area, roughly forming a triangle with 10 km edges, in Laguna province. San Pablo — with its many lakes — has a big tilapia. Victoria, known for its sweet pinya, a fierce pineapple. 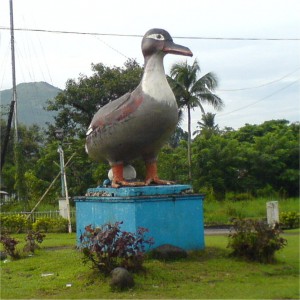 Laguna de Bay, the place to eat ducklings-in-the-egg known as balut (not for the faint of heart) has duck statues (here is another good one).

There are plenty of (golden and other) cow statues, in Asian temples, and elsewhere. Do you know of other statues that honor the the organisms that feed us?