What connects oats and maize (apart from both being grasses)? Both are the protagonists in an effort to use art to open people’s eyes. 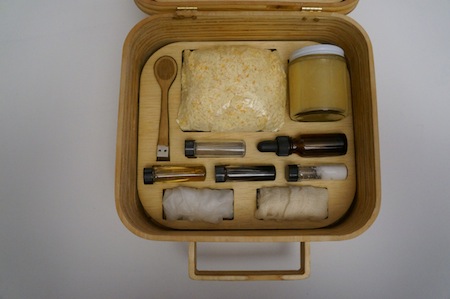 Maya Weinstein‘s latest food-centred project is a recipe and complete set of ingredients to make your own High Fructose Corn Syrup. Yup, the bad boy of the US military industrial food complex, right there in your own kitchen.

Mix 10 cups of Yellow Dent #2 corn extract with one drop sulfuric acid, one teaspoon Alpha-Amylase, one teaspoon Glucose-Amylase, and one teaspoon Xylose, strain through a cheesecloth, and heat. Then, once the slurry has reached 140 degrees, add Glucose Isomerase, bring to a boil, let cool, and enjoy!

I got the story (and the quote) from bon appétit, which explains that “even though you can find [HFCS] in almost every product on the market, from soda pop to whole wheat bread, you can’t just buy HFCS by itself. Anywhere”.

Weinstein’s project is in some ways the very opposite of industrial HFCS: it is expensive — her kit goes for $70-80 — and kind of artisanal, in that the product actually bears some resemblance to corn.

“I’d like to give this recipe to people and let them do what they will,” Weinstein said. “It’s all about doing it yourself, taking the ideas of open sourcing technology and applying them to food. By taking back these foods that aren’t ours, deconstructing them and reconstructing them, maybe we can disrupt the industry a little bit.”

As for the oats, Benedikt Groß, a “speculative and an interaction designer” has made them the ink droplets in his version of agricultural printing. 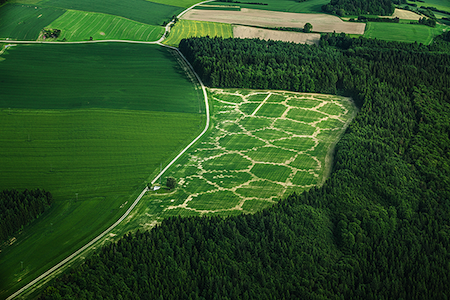 We’ve written here before about similar things, including rice art, but to be honest those fields are, to my mind, pretty kitsch. Groß is after something different, a method of growing oats interspersed with wildflowers where the ultimate harvest is feedstock for bioenergy, rather than food for people (in Scotland). Here’s his explanation:

The project uses the idea of “Agricultural Printing” to explore the possibilities of digital fabrication carried over into farming. The experiment applies algorithms to partition and to create an environmentally beneficial structure into a standard biomass/energy production field. These additional areas establish, or improve, the connectivity for fauna and flora between habitats. This increased diversity also eases typical problems of monocultures e.g. less vermin → reduced usage of pesticides. Furthermore a farmer could “rent out” the areas for several months a year as compensatory area in the same fashion like the CO2 emissions trading scheme works (in the EU every new land for building has to be compensated). Hence in the near future a farmer might not just produce oats, peas, beans and barley, but also print “environment compensations areas” into his fields.

Of course you may, like me, feel that pandering to bioenergy is barking up the wrong willow tree. And that disrupting the food system by doing what they do, but at home, is not all that disruptive. Art, though, doesn’t have to make sense. It does have to make you think, and these two projects did just that.

2 Replies to “It’s agricultural, but is it art?”