At last, I found my copy of The Tomato in America, by Andrew F. Smith. He is The Man on the tomato (and much else) in US history. I can thus enlighten myself (and Jacob) further on Thomas Jefferson and the Tomato. Smith writes: 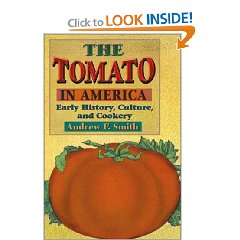 Despite the tomato’s presence along the Atlantic Seaboard and the Gulf Coast, its introduction and adoption in the interior areas of southern states appear to have been delayed. In Salem, North Carolina, tomatoes were not sown until 1833, when a gentleman from South Carolina sent seeds to an “old Mr. Holland.” At that time no one had tasted tomatoes, and scarcely any one had heard of them. Similar late arrivals were probably common for other rural areas of the South. In 1820 Phineas Thornton published a thorough inventory of the kitchen garden plants within a twenty-mile radius of Camden, South Carolina, and made no mention of the tomato. His Southern Gardener and Receipt Book, published twenty years later, included instructions for cultivating and preparing tomatoes for the table, which suggests that they were introduced in Camden sometime between 1820 and 1840.

Concurrently, as tomato culture expanded in the Carolinas, it also evolved in Virginia. According to Thomas J. Randolph, his grandfather, Thomas Jefferson, asserted that when he was young, tomatoes ornamented flower gardens and were deemed poisonous. By the account of J. Augustin Smith, president of the College of William and Mary, Jefferson met Dr. John de Sequeyra while he was in Williamsburg. Sequeyra had immigrated to America around 1745 and “was of the opinion that a person who should eat a sufficient abundance of these apples, would never die.” As he lived to old age, an unusual feat in the marshy environs of Williamsburg, his peculiar constitution supposedly resisted the tomato’s deleterious effects. This anecdote was published during Jefferson’s lifetime, which offers some credibility on its behalf. Sequeyra’s preoccupation with tomatoes was supported by other sources. E. Randolph Braxton reported that “Dr. Secarri,” his grandfather’s physician, “introduced the custom of eating tomatoes, until then considered more of a flower than a vegetable.”

Despite Sequeyra’s introduction, it is unlikely that tomatoes were grown extensively in mid-eighteenth-century Virginia. America’s first gardening work, John Randolph’s Treatise on Gardening, written in Williamsburg probably before the American Revolution, made no mention of them. A correspondent in the Farmer’s Register expounded that tomatoes were hardly ever eaten in Virginia during the 1780s and 1790s. He also explained that Virginians had called them love apples out of ignorance of their proper “foreign title, tomato,” which they pronounced as if it were spelt “chu-mar-tus-iz.” While Jefferson was in Paris in the 1780s he sent tomato seeds to Robert Rutherford, who grew and devoured tomatoes in Berkeley County in western Virginia. By 1800 Rutherford had convinced only one other person to eat them.

During the early nineteenth century tomato culture increased. While he was president, Jefferson noted that fresh tomatoes were sold in markets in Washington. They were sold in Alexandria by 1806, which suggests that they were used for culinary purposes by at least some residents. In 1814 they were eaten in Harpers Ferry. In the same year, John James ate them in a public inn near the Natural Bridge in western Virginia. The proprietor claimed that tomatoes had been used as an article of diet in that section as long as she could recollect. Thomas Jefferson grew them at Monticello beginning in 1809 and ten years later served them to Salma Hale.1 According to Hale, Jefferson claimed to have introduced them into America from Europe. If Hale’s recollection was accurate, Jefferson may have been referring to a particular variety of tomato, such as those sent to Robert Rutherford. By the early 1820s they were raised in abundance throughout Virginia and adjoining states and were regarded as a great luxury.

On Smith’s say-so, then, I believe one can discount all claims that Jefferson grew such and such a tomato in the 1780s and probably the 1790s too. But stories that add years to varieties have a powerful attraction, and if they are mistaken in detail, they also make the larger point. That the stories in which varieties are embedded are a signal of their importance.

3 Replies to “Chu-mar-tus-iz: Th. Jefferson and the Tomato”