The Sacramento Bee has a nice piece by David Boulé1 about the history of the ‘Washington’ Navel Orange in California, the world’s second most common orange variety (after ‘Valencia’).

Navel oranges have been known in Spain and Portugal for centuries. They made their way from there to Brazil, where, in Bahia, a seedless and easy-to-peel variety of great taste and color was discovered. It was probably a sport (mutant) from the Portuguese variety ‘Umbigo’, which is said to be described in the Histoire naturelle des orangers by Risso and Poiteau (you can get your own copy).  I could not find it in that book, but I did enjoy Poiteau’s botanical drawings, like this one2: 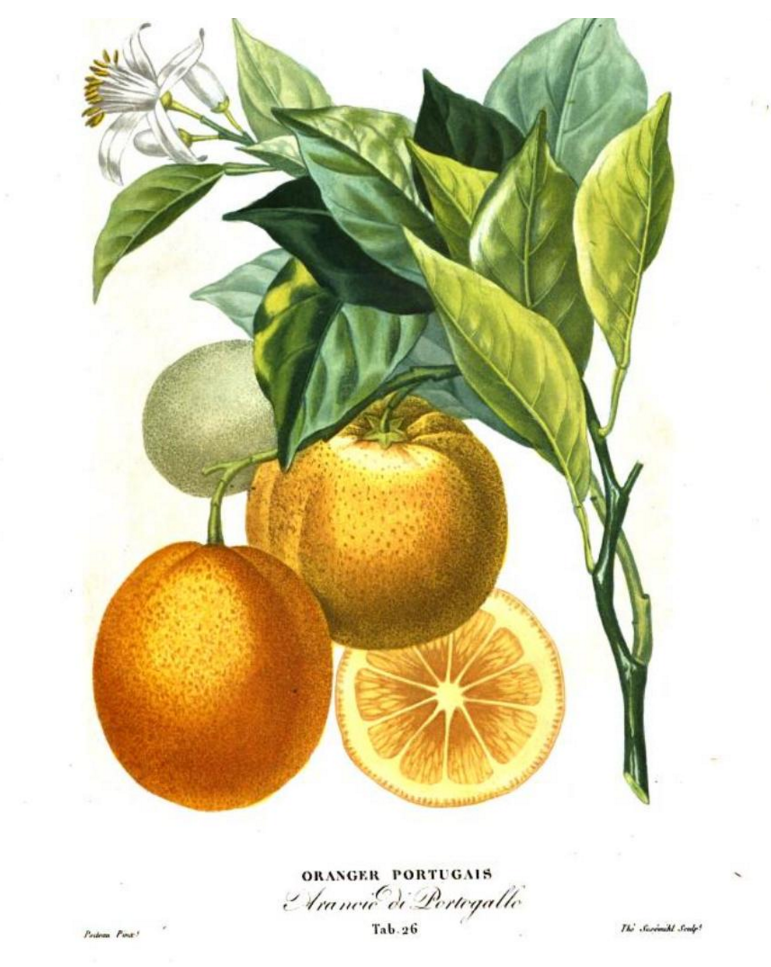 From Bahia the tasty navel went to Australia in 1824 and to Florida3 in 1835, and from Australia to California. But the introduction that led to adoption of the name ‘Washington’ and to its commercialization in California and around the world occurred in 1870, when William O. Saunders of the USDA received twelve trees from Bahia (twigs in an earlier shipment had been dead on arrival). They were planted in a greenhouse in Washington D.C. and propagated for distribution4.

On 10 December 1873, Eliza Tibbets of Riverside, southern California, traveled by buckboard to Los Angeles to pick up two of these trees, delivered by stagecoach from San Francisco5. Their fruits won first price at a citrus fair in 1879, and the ‘Washington’ navel spread rapidly after that — there was a citrus gold rush going on after the recent completion of the transcontinental railroad, which allowed selling to markets back east. Oranges were commonly propagated by seed in California, but the seedless ‘Washington’ had to be grafted. The Tibbets sold cuttings at a dollar each, earning as much as $20,000 a year.

In 1903, one of the original trees was transplanted to a location in front of the Glenwood Hotel in central Riverside, with president Roosevelt shovelling some of the dirt.6 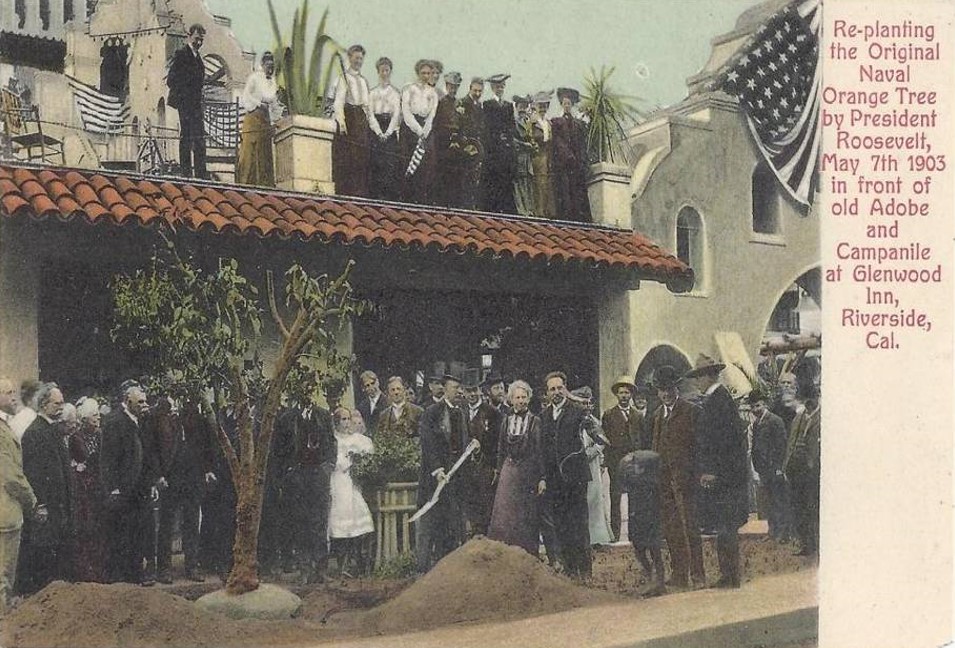 That must have been about here (the name of the hotel was changed to Mission Inn). Alas, the tree died after a couple of years. But it was there long enough to be used in marketing: 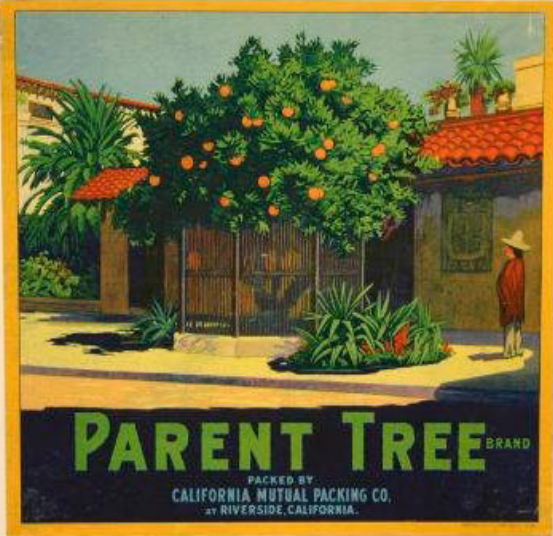 The other ‘parent tree’ was planted a couple of miles south of the Glennwood Inn, in Low Park. It is still there, see for yourself, about 145 years old, despite its dire state 50 years ago:

for some years past it has been declining in vigor, and in 1967 seemed unlikely to survive much longer.

The tree is a ‘California historical landmark’ and has this plaque in front of it: 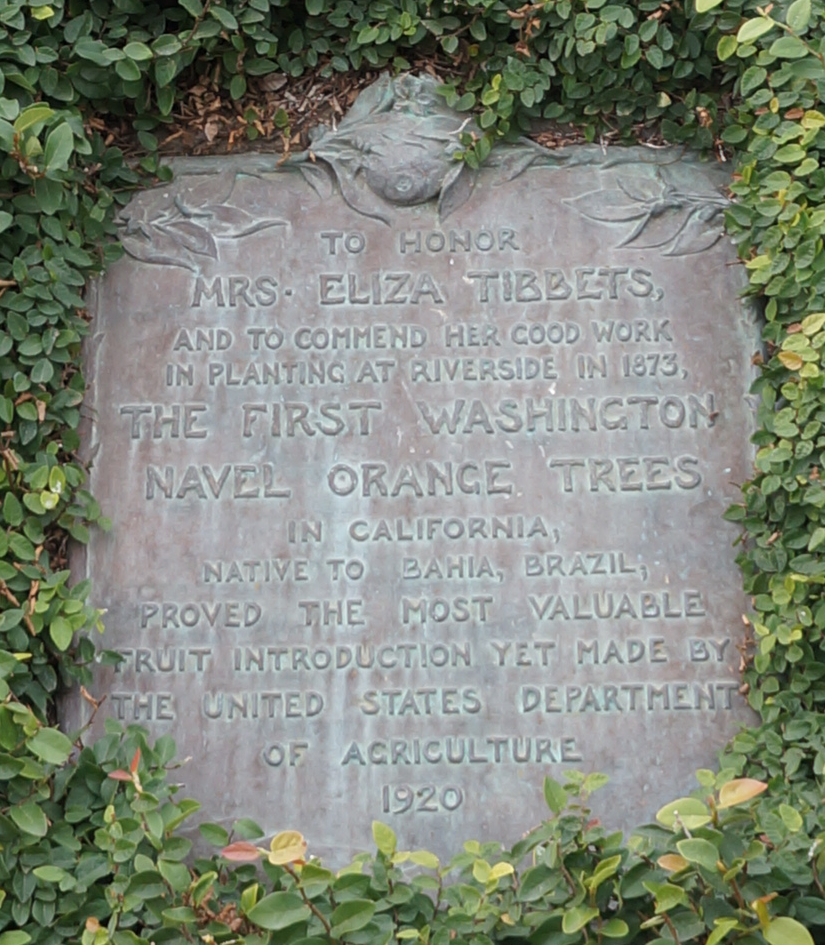 most valuable fruit introduction yet made by the USDA.

Was that a fair claim back then? And if so, is it still true? There is some economic analysis here and here.

Riverside does not boast only that tree, it also has the California Citrus State Historic Park. And after you visit that, drive east to the Coachella Valley to see the dates that were introduced a few decades later.7

Tina Kyndta and collaborators1 have found that all cultivated sweetpotatoes are naturally transgenic because they contain transfer DNA (T-DNA) sequences from Agrobacterium.  Gene-transfer via Agrobacterium is a naturally occurring process, that is used to make genetically modified crops in the lab. We did not know that one of our main food crops was once naturally transformed via the same process.

Kyndta et al. did not find any T-DNA in the wild relatives of sweetpotato, suggesting that the transformation(s) provided a beneficial trait that was selected for during domestication. The introduced genes are intact and expressed in different organs of the “Huachano” variety that they studied in detail, but we’ll have to wait for future expression studies to find out about the benefit of these paleo-GMOs.

The authors also suggest that, as people have been eating these swollen roots for millennia, we might now consider all transgenic crops to be “natural”. I don’t know about that. Didn’t most of these people suffer and die young? I predict that sweetpotato consumption will plummet now that the word is out.

David Spooner and co-workers have written a comprehensive overview of the systematics and genetics of wild and cultivated potato species (Solanum section Petota)1. This nicely illustrated and very accessible paper is essential reading for anyone interested in potato diversity — or indeed the study of plant diversity in general.

A remarkable aspect of wild potato systematics is the way the number of recognized species has fluctuated over time. In 1956, Hawkes recognized 106 species, but in his 1990 treatment of the group this had increased to 232. This will likely be the highest number we’ll see, because it has come down drastically since, and Spooner et al.’s paper puts it at 107 — almost exactly where it was back in 1956. This does not mean that we are back to the same set of taxa though. Many new species were described after 1956, notably by Carlos Ochoa, who named about 25% of the 107 species.2

The graph below shows the number of species over time, based on published compilations, and the name of the authors3 . 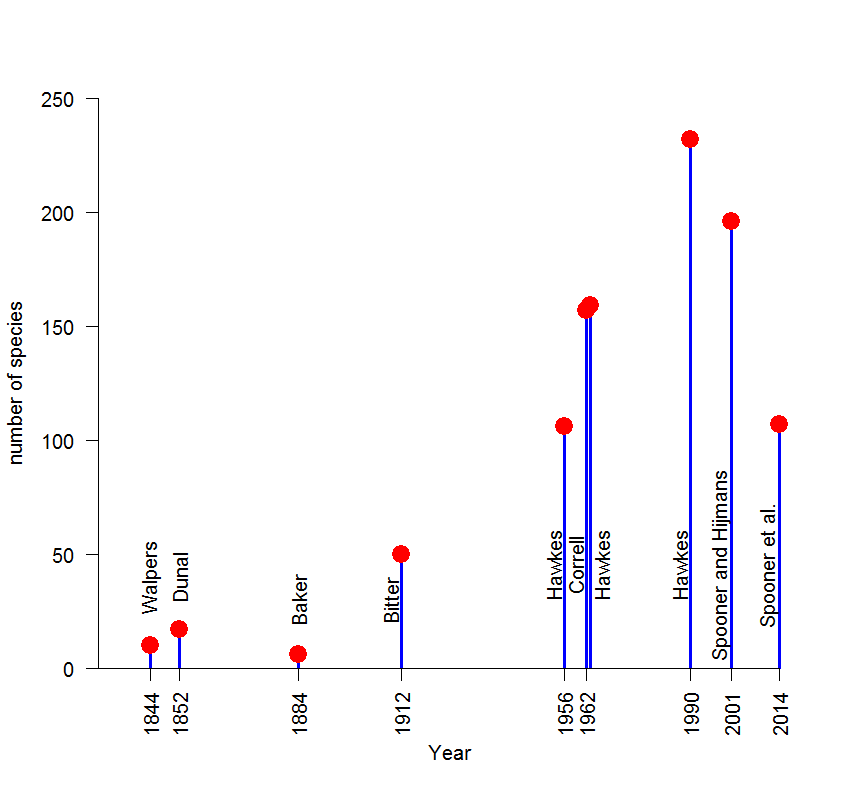 It is not easy to determine where a wild potato species begins and where it ends. Many species look very similar, and there is “lack of strong biological isolating mechanisms and the resulting interspecific hybridization and introgression, allopolyploidy, a mixture of sexual and asexual reproduction, and recent species divergence.” A smaller number of species is not necessarily better, but, in the case of wild potatoes, Spooner et al. think it will help us move away from “a taxonomy that is unnatural, unworkable, and perpetuates variant identification” to a system that hopefully enables better conservation and use of these plants.

It also creates a mess, though, because previous analyses based on species level diversity, for example to set collection and conservation priorities, may need to be revised. Spooner et al. update some of the analysis of geographic pattern in wild potato species richness described previously.

The reduction in the number of species is in large part due to new insights from David Spooner’s incessant work on this group, through molecular and morphological studies, and observations during collecting expeditions. His kind of naturalist is a species that is also declining in numbers, or so it seems. That is not a good thing, as there is a lot of work to do.

In my previous post on the new EU Common Agricultural Policy, I missed that it promotes in situ conservation of crops. At least that is my reading of Annex IX, which provides a list of practices equivalent to crop diversification. The text is a bit confusing (why are legal documents never clear?); here’s an excerpt (my bolding):

The ‘and‘ does not make sense, and should surely be ‘or‘? Otherwise there would be no ‘equivalency.’

Perhaps it is a European thing to emphasize the old & traditional over the novel & rare? Either way, there are busy times to come for European on farm conservation buffs! But where should interested farmers get seed? Many of these varieties may not be registered, and I thought that exchanging such seed was not legal in Europe?

The European Union’s revised Common Agricultural Policy, effective from January 2015, has introduced a measure to promote agricultural diversification. The “Greening Payment” rewards farmers for practices perceived to be ‘beneficial for the climate and the environment’. It is big pot of money: 30% of the national level agricultural subsidies. Compliant farmers get a (per hectare) payment, offenders get a fine.

These are the Greening measures that farmers can take:

This is pretty complicated.

Farms that already have ‘Greening Equivalency’, such as organic producers, do not have to meet these requirements, because, says the EU, ‘their practices provide a clear ecological benefit’. There are more exceptions. For example for:

farms that already fulfill the objectives of crop diversification as a result of being covered to a significant extent by grassland or fallowland, for specialised farms rotating their parcels each year or for farms that because of their geographical localisation would have excessive difficulties in introducing a third crop.

I suppose it is on the basis of such ‘excessive difficulties’ that rice farms (at least in Andalucía) are exempt. Who else is going to be exempt? Why not include the  thousand Scottish farmers that grow only one crop — spring barley for whisky? But that still leaves them muttering into their warm ales in the arable east of England, where opponents of the measure suggest that increasing crop diversity is less efficient and leads to more greenhouse gas emissions.

If these rules are here to stay, they will likely lead to creative book-keeping and a new agricultural land market to join, for example, a wheat farm with an olive grove, perhaps in different countries.

But what about the science behind all this? Research on “ecological focus areas” suggests that these may not deliver the goods. And there is no thought given to taxonomy: it is as green to grow wheat and barley as it is to grow beans and barley, or wheat and spelt.

Some of the most intensive (and, on a per ha basis, often the most environmentally problematic production systems) have more than three crops (not to mention horticulture). In the Netherlands, for example, most arable farms grow three crops or more: potato and wheat and perhaps sugarbeet, barley, onions, or another vegetable. This is part due to legal requirements on growing potatoes in a four year rotation in most regions, to reduce nematode (and nematicide) problems.  These Dutch farms will get the subsidy, but a low input wheat farm in central Spain could get a fine.

What is the current baseline, and where does the EU think it will get with these rules? I could not find any analysis this is based on, can anyone point to that (if it exists)?

Here are  some  estimates of the areas affected in the UK. It is hard to get farm level crop diversity data; but we have statistics about crops by region, from which that can be estimated though. There’s something fun that I could do this week.