It seems I may have inadvertently walked into a little bit of a controversy with that post on Herbemont. Dr Jerry Rodrigues of the University of Cape Town hopes for a resolution in a comment on the post:

Let’s hope that sooner rather than later, researchers in the Department of Viticulture and Enology or at the National Clonal Germplasm Repository (University of California, Davis) or the Plant Genetic Resources Unit (PGRU) at Geneva, New York will not be afraid to make public the microsatellite DNA markers for the true Herbemont.

Whereas Erika Maul from the Julius Kühn-Institut, which maintains the Vitis International Variety Catalogue (VIVC), has this to say in an email:

Herbemont and Jacquez are maintained in European collections and seem not to be endangered. These photos from VIVC could assist to confirm identification. 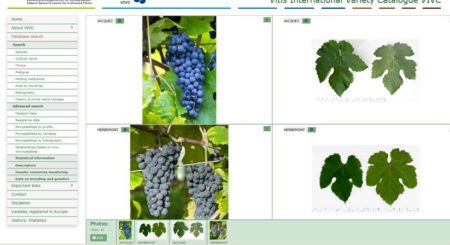 Susan Bragdon is not so sure about that OECD study about innovation in a consolidating seed sector:

Even if we were to miraculously all agree that these big guys are innovative that does not mean they are behaving in ways that promote or at least do not hurt the public welfare. Corporate concentration allows an exertion of power vertically up and down supply chains and not just in this sector. And unfortunately, powerful, concentrated corporate power increasingly set the rules of the game affecting any kind of true democratic accountability. And it is not just agriculture…

And extra points for spotting the link to the post on extension :)

Ashley Gould doesn’t think much of a story about Yen’s sweetpotato collection in New Zealand that I linked to a few years back.

“Feel good” but essentially untrue… Disinformation and confusion dominated this story from 1988.

Good to have these things debunked. I should have researched the story better.

Jacob has a suggestion for researchers interested in the link between agricultural diversification and nutrition:

We need a new generation of studies that looks at the effects of diversification on nutrition with a broader perspective on the candidate mechanisms for this link.

So, people, get specific.

This was in reply to a Brainfood snippet on a recent paper by Vincent Lebot and colleagues: “Adapting clonally propagated crops to climatic changes: a global approach for taro (Colocasia esculenta (L.) Schott).”