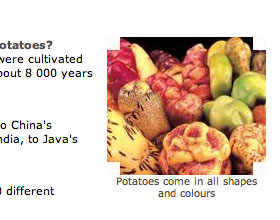 I hate to be pedantic here. (Actually, that’s a terrible lie; I love to be pedantic, especially about crops and food.) But if you look closely at the photograph, and you know your tubers, you’ll know that those aren’t potatoes in the picture. They are oca and mashua. Andean tubers, to be sure, but not potatoes. So who made this elemental error? None other than the good folks at the International Year of the Potato.

Worse, it’s on the page specifically addressed “Hey, kids!” (Lord how I love that exciting exclamation mark.) One could, of course, argue that the caption just happens to be underneath a photo of other Andean tubers. But that won’t wash. What we have here is a total and abject failure to know anything whatsoever about potatoes. How can kids! trust anything else on the page?

Researchers have estimated rates of reproduction and survival for the marbled murrelet by “comparing the ratios of birds in different age groups using 170 specimens collected between 1892 and 1922 housed in the collections of the California Academy of Sciences and the UC Berkeley Museum of Vertebrate Zoology … with values predicted from comparison with other bird species, and with contemporary rates obtained from murrelets they captured at sea and from their mark-recapture studies.” The results suggested that birth rates were almost 10 times higher for this endangered seabird 100 years ago than they are today. Read all about it here. That’s a very creative use of a biodiversity collection to explain the recent decline in numbers of this species, and its conservation status. Has something similar been done with herbarium and/or plant genebank collections? I can’t think of any examples, but they must be out there…

This EU-funded project has looked at all the national parks and reserves in Africa and assessed the contribution each makes to conserving biodiversity as part of the overall system of protected areas. Really an incredible job. Mainly dealing with animals, however, so I wonder if something similar could be done with things like wild crop relatives or something. Also, could these techniques be applied to in situ crop conservation?

Looks like the genebank of the National Institute of Agrobiological Sciences in Japan has revamped its English web site. There’s a request form, too. So, use it! More people ought to avail themselves of the treasures in genebanks, and it isn’t hard to do. It makes use of the genebank, which adds to its perceived value, and it could bring you joy and delight in your fields or gardens.

Hawaiian taro farmers â€“ they call it kalo there â€“ know the difference between the varieties Haokea and Mana â€˜Åpelu, and thanks to a nifty piece of software now so can everyone else. A researcher in Fiji, say, can quickly see whether they might be the same as the ones sheâ€™s working on half an ocean away (at least outwardly, see forthcoming article on genomes).

The software makes use of a different kind of taxonomic key. The usual kind of key that people use to identify things is called a dichotomous key, and it has been an essential part of the taxonomist’s toolkit pretty much since Linnaeus. It consists of a series of questions about what an organism looks like, each of which can have one of two answers, wherein lies the dichotomy. Are the petals red or purple? If red, are the leaves pinnate or palmate? If purple, does the stem have thorns or not? And so on. If you answer all the questions â€“ and there can be a lot â€“ youâ€™re rewarded with the name of the organism youâ€™ve been trying to identify.

That can be a big if. The dichotomous key has been a very successful tool, but it does have some major drawbacks. What happens, for example, if the part of the organism youâ€™re being asked about â€“ flowers, say â€“ is not available? And what happens if youâ€™re not quite sure about the difference between the two choices presented, say between pinnate and palmate leaves in the example above. You could try the key one way and then the other and see what answer makes the most sense, but that will be very time-consuming. Keys can also simply be badly made (or badly translated), or out of date.

Recognizing that something must be done, and that, with the necessary computer tools just beginning to become available, it now could be done, scientists at the CSIRO Division of Entomology in Australia started developing the DELTA software suite in 1971. This is based on the use of the DELTA format (DEscription Language for TAxonomy), a method of recording taxonomic descriptions for computer processing that has since been adopted as a standard for data exchange by the International Working Group on Taxonomic Databases. One of the DELTA programs can be used to prepare conventional dichotomous keys. But another, called Intkey, can produce â€œinteractive keys.â€

Also called â€œmulti-access,â€ these are keys where characters can be used in any order. You put into the program the information you have about the organism you are trying to identify. The software does the rest, finding the best overall matches based on the descriptions it has in its database, with a measure of how likely each match is. It also suggests what other characters to look for to narrow down the options further. No inflexible series of often ambiguous questions, coming to an abrupt halt when you find you donâ€™t have the bit of plant you need. No going back to the start if you get something wrong or are not sure of one of the answers you gave. Much better all round. But difficult to do without a computer if youâ€™ve got lots of options and lots of characters, which is why Linnaeus didnâ€™t go the interactive way.

Lately, the Centre for Biological Information Technology at the University of Queensland, Brisbane Australia has developed another interactive identification system, called Lucid. PACINET, a regional taxonomic capacity building partnership in the Pacific in which Iâ€™m involved, recently organized a training course in the use of Lucid here in Fiji. PACINET is affiliated with the BioNET-International global network in taxonomy. Lucid proved pretty simple to learn and use. Participants were able to put together prototype identification systems in just a couple of days, for example for the reptiles of Fiji.

The names of the organisms at the end of keys â€“ whether dichotomous or interactive â€“ are usually the Latin names of species, but they donâ€™t need to be. They could just as well be the names farmers use to refer to their taro â€“ or kalo â€“ varieties. Honoluluâ€™s Bishop Museum has developed a website on Hawaiian taro varieties using Lucid. The museum doesnâ€™t conserve kalo germplasm, just the information about the local varieties. I canâ€™t think of a single genebank that is using an interactive identification system to manage their collections. They should be. Then if a new variety turns up, they could very quickly determine if something similar to it is already being conserved. They could also work out if two or more varieties they are conserving, perhaps with different local names, are actually very similar, at least in appearance. You could do all this with standard database software, of course, but an interactive identification system makes the whole process so much easier, and so much more fun.