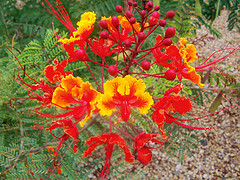 A fascinating reflection by Dr S. Allen Coulter, professor of neurology and neurophysiology at Harvard Medical School and Massachusetts General Hospital, asks a question that perplexes many people: how did people acquire their detailed knowledge of the effects of plants on the body? Coulter’s musings are prompted by “scientific” studies on Caesalpinia pulcherrima, which reveal active ingredients that match the effects he was told by a wise person some years ago. I feel the same way about complicated food processing methods; how on earth did people learn how to render toxic and inedible things safe and delicious? Like Coulter, I fear we will never really know.

Flickr photograph by Esther17 used under a Creative Commons License.

If you thought the video of the cranberry harvest entertaining, you might also enjoy seeing bacteria succumb to all that cranberry goodness. ScienCentral has the gore-fest on film (as it were). A report on the Sarawak Biodiversity Centre details the centre’s efforts to record traditional knowledge of beneficial plants. A look at the species documented so far indicated that more than 35% do have some useful active ingredients.

Associated Press reports that Indian scientists have rediscovered Begonia tessaricarpa, a plant believed to have medicinal properties that has not been seen for several decades. The full paper is here. Longer newspaper report here.