The results are summarized in two articles, one in Plants evaluating methods to ensure the viability of collected seeds, and the other in Crop Science summarizing the characterization of diverse phenotypes.

We’ve included both the papers in question in past Brainfoods, but this press release, from which the above quote is taken, does a really nice job of bringing them together. It might also have added an additional recent paper on the work of the International Musa Germplasm Transit Centre (ITC), but anyway.

There’s a whole bunch of summary statistics on the ITC, and lots of useful links, on the Genebank Platform webpage. And of course Genesys has a selection of accession-level data. But the place for all your banana information needs is ProMusa.

Jeremy’s latest newsletter includes this nice write-up of a recent paper on the origins of Chinese food, under the title I’ve stolen above. Here’s the rest of the newsletter. We blogged here about the paper Jeremy discusses in the podcast episode mentioned at the end.

Path dependence is the idea that the choices available today are constrained by choices that were made some time back. A new research paper in PLOS One looks at the way existing cooking techniques affected new crops as they made their way into China.

Wheat and barley arrived in China about 4000 years ago. But while the people of western China adopted the new plants quite quickly (you can tell by looking closely at their bones) those in central China were apparently not as keen.

The reason, according to the researchers, reflects north-south differences in cuisine that can be detected 8000 years ago. Northeners had millet as their staple grain, while southerners ate nuts, tubers, fruits and rice. Overlaid on this, central China is part of the northern complex, where millet was prepared by boiling or steaming the whole grain. Western China’s approach to wheat and barley was to mirror their neighbours to the west, grinding the grains to make flour that was baked into breads.

It took much longer for cooking methods in the east to adapt to the new cereals, not least because it takes far longer to boil wheat than millet, and the taste is quite different. There is some evidence, too, that in the course of this adaptation, wheat itself was selected to be more amenable to boiling and steaming.

This east-west vs north-south story adds detail to the [Eat This Podcast] episode with Martin Jones on Prehistoric food globalisation.

This special issue results from a renewed call to demonstrate the value-in-use of conserving and supplying plant genetic resources conserved in genebanks to researchers, plant breeders, and farmers. We present these studies as a collective contribution to a relatively small body of literature that highlights not only the importance of crop plant diversity managed by genebanks but also the diversity of genebank functions and uses.

The special issue is of Food Security.

Kudos to my colleague Nelissa Jamora for making it happen.

So the original idea of this post was to document how I fed accession locality data into two new online mapping tools I had recently run across, and then maybe even mashed up the results. It didn’t quite work out that way, but I did spend quite a bit of time on trying to make it happen, so I want to get some kind of blog post out of it anyway. So here goes.

The two new tools are:

My thought was to get a bunch of localities for landraces of a crop from Genesys, plug them into the accessibility tool, and then compare the output of that with the overall suitability map for the crop in the region in question. Result: areas suitable for the crop but far from locations of current genebank accessions. That is, priorities for further collecting. Or at least one possible approach to prioritizing collecting.1

The first bit was easy enough. I got locality data on barley accessions from Yemen out of Genesys, fiddled with the CSV file a bit, uploaded it into the accessibility tool, ran it, and eventually downloaded a GeoTIFF, which you can upload into Google Earth.

The next step was not so straightforward. I was just not able to get a sensible map for barley in Yemen out of the Crop-Climate Suitability Mapping tool. And I did try. A lot. All I got was the whole of Yemen being classified as “pessimal” for barley, which can’t be right. “Max agriculture extent” was not bad, but no amount of fiddling with the parameters allowed me to produce a mad showing where barley might be expected to grow within that area. But even if I had succeeded, it was not clear to me how I could have used the results outside the confines of the tool itself. There’s no way to download the map, that I could find, apart from a screenshot like this one, which just shows that wherever there is agriculture in Yemen is abysmally bad for barley (red means “pessimal”, orange merely unsuitable). 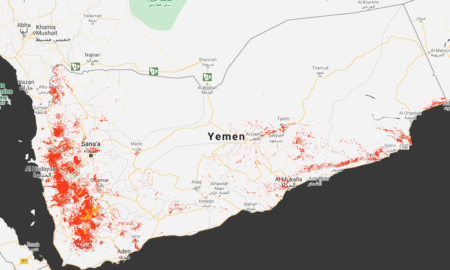 But having invested quite a bit of time already, I decided to fall back on SPAM. The Spatial Production Allocation Model is still the go-to tool for crop suitability mapping, it seems. And the maps you can make online, such as this one for barley, are nice. 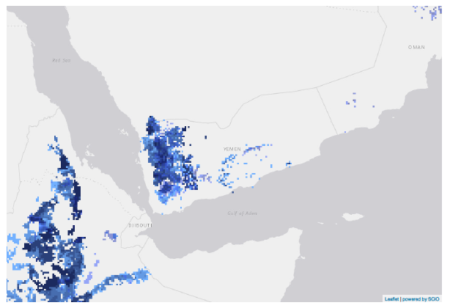 There’s not much more you can do with this, though. You can map accessions from Genesys from the same menu, though not, alas, on the same map as the suitability results. However, SPAM does also provide downloadable data for barley, which comes as part of a huge bunch of global GeoTIFFs. I uploaded that into Google Earth along with the accessibility map.

Here’s what I got. 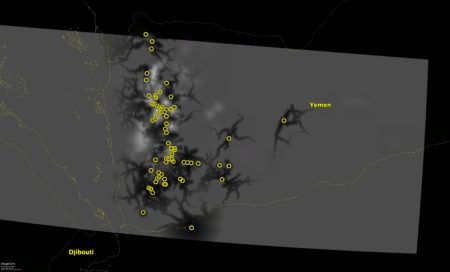 Ok, not great, I admit. The colour from both the accessibility and SPAM results disappeared when imported in Google Earth, so now suitability is the lighter colour and accessibility the dark streaks. I’ve overlapped the layers so that if you see any light colour, that shows places which are suitable for barley but relatively inaccessible from the locations of other barley accessions (the yellow circles). Those could be your priority collecting localities, in other words.