According to a report over at the Vaviblog, Bioversity’s nutritionist Jessica Fanzo was beset by questioners after her talk at the Vavilov Institute mentioned both the bad nutritional status of most Russians and the high nutritional value of some fruits and berries at the threatened Pavlovsk Experiment Station. She was bombarded with requests for advice. The Vaviblog’s correspondent reports:

One response stuck in my mind. Jessica was asked whether one couldn’t get all the vitamins and minerals one needs from pills. She said yes, but you have to get everything else from food, so why not the vitamins as well, by choosing your food better?

Especially if you like your potatoes processed and potable.

It is very refreshing to see some real reporting on the situation around Pavlovsk Experiment Station. National Public Radio in the US today airs a story by reporter David Greene that goes a little beyond the recycling we have seen so much of. He explains, for example, how the gardens at Pavlovsk can look abandoned and yet remain vitally important. He also talks to scientists and locals.

One thing I don’t get. Greene writes:

Barring action by the Kremlin, the first land auction could take place as soon as Sept. 23.

But when will we know the results of either the scrutiny ordered by President Medvedev or the appeal to the Supreme Arbitration Court?

The Associated Press had a big round-up on the threatened Russian genebank at Pavlovsk late last week. We’re linking to the version that appeared at the National Public Radio website because they used lots of photographs, many of which give the lie to statements that the land is not being used. Kudos to AP for doing some fresh reporting. Kudos also to Science magazine, for a report from a correspondent in Moscow. The article is behind a paywall.

We’re still not getting much news out of Russia herself. What exactly is going on, officially? And is anyone there blogging about it or otherwise commenting? If you know, please let us know. 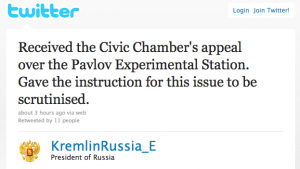