I’m jealous of Luigi’s ability to work and play almost simultaneously.1 He visits a market in Sarajevo and within hours his words and pictures are gracing this page. I visit a genebank in Belgium and it is more than a fortnight before I manage to pull anything together. But no more whining. On with the show.

I was privileged to get a guided tour of the International Transit Centre in Leuven, home of Bioversity’s International Musa collection, which is supported in part by the Global Crop Diversity Trust. There are good reasons for it to be in Belgium, but it is still a glorious sight to see banana plants scraping the roof of a 5-metre tall greenhouse.

That’s Rony Swennen in the picture, doing his tour guide schtick in the main greenhouse. He runs the show. One of the things that’s hard to understand, coming from a purely cultivated view of the banana, is the role that some species play in the wild. They can be really opportunistic colonisers.

Just in front of Rony was a specimen of Musa velutina, with pinky-red skinned fruit. And beneath it, a veritable carpet of seedlings. M. velutina is a pioneer species that often spreads rapidly into newly cleared areas and can choke riverbanks and the like.

It isn’t all bananas in the greenhouse. There is also Taro, and a few other tropical crops that are normally propagated vegetatively. Leuven has been named a Global Centre of Excellence in Cryopreservation. The researchers have perfected the protocols for preserving banana cells in liquid nitrogen, and now they tweak them for many other crops and train scientists from other countries to do the delicate work of cryopreservation.

Cryopreservation has many benefits over keeping plants in tissue-culture, the standard genebank technique for clonal crops. It’s cheap and efficient, once the capital costs are accounted for. But both methods can obscure problems. Frozen material, just like stuff in tissue culture, occasionally suffers a mutation in its DNA. So from time to time samples are grown out to check that they haven’t changed dramatically. The plant on the left has, and the batch from which it came will be discarded. The rate of such off-types is about 7%. That’s low. But the genebank has multiple samples of each accession, to be sure, to be sure. 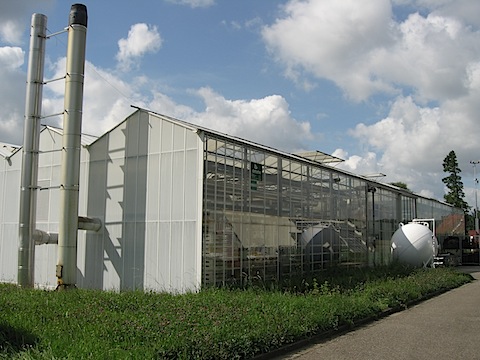 So there you have it. A quick romp through what I did on my recent travels. More later.

One Reply to “Exploring a Belgian genebank”