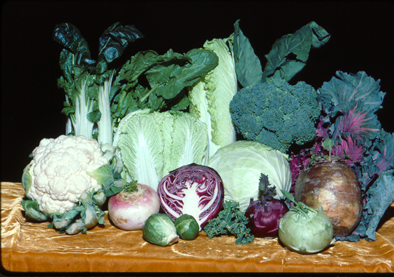 Cabbages are the dogs of the crop world, trotted out whenever a point about diversity needs to be made.1 Brussels sprouts, Siberian kale, kohl rabi and good old boring Savoys are all members of a single species, Brassica oleracea, just as chihuahuas and great Danes are all Canis familiaris. If anything, though, brassicas are more complicated, because different species also interbreed moderately freely, much more so than the occasional doggie-style hybrid. One of the products of that promiscuity is the species known as oilseed rape, B. napus. Cabbage and turnip (B. rapa) apparently did their thing spontaneously “some centuries ago”. But they did so only a few times, and as a result the genetic diversity of oilseed rape is rather limited, depending as it does on the diversity present in those few original crosses between cabbage and turnip.

An obvious solution (obvious to plant breeders at any rate) is to reproduce those original crosses and resynthesize oilseed rape by arranging crosses between a more diverse bunch of cabbages and turnips, and indeed that is now old hat. Various programmes since the 1990s have created scores of “new” varieties of oilseed rape. The problem is that many of these have all the drawbacks of old oilseed rape, before the seeds were cleaned up of their nasty biochemicals and sanitized as canola. Merely crossing resynthesized oilseed with existing varieties in the hope of getting some of the better qualities of the new varieties into the improved cultivars is thus fraught with the risk of introducing bad stuff as well. The answer is backcrossing, breeding the offspring lines with their parents while selecting for the good qualities and against the bad qualities. As the authors of a new paper2 note, this is

“a labor intensive approach and a long-term perspective, and appropriate resynthesized lines would have to be selected carefully.”

If you’re going to get into that, you may as well choose the parents for your breeding programme to be as different as possible from what you already have, to maximise the chances of finding something good and useful. Which is what the paper is all about. Andreas Girke and his colleagues measured the genetic distances within three distinct groups of oilseed rape and a collection of resynthesized varieties. They found, more or less as expected, that the spring, winter and Asian oilseed rapes were more similar to one another while the synthetic rapes were more diverse. Furthermore, and reassuringly, while the three groups tended to cluster as groups in a more detailed analyses of their DNA diversity, the synthetic rapes were roughly equally spread among the three clusters. The detailed analyses will give brassica breeders some of the information they need to breed better oilseed varieties. But a crucial question remains unanswered. How do offspring of the synthetic rapes crossed with established varieties perform in the field? The researchers crossed 44 synthetic rapes with two cultivars and planted out the offspring to measure how well they do and whether there is any relationship between the genetic distance between the two parents and performance in the field. But don’t get too excited; “The result of these studies will be presented in a separate publication.”

P.S. Many of the crops on which humanity depends are genetically interesting inter-specific hybrids, and re-doing the original, accidental crosses not only throws light on their evolution but also is of practical value to breeders. The whole business of resynthesized lines, which as far as I know began with CIMMYT’s synthetic wheat lines, is little known outside the esoteric world of plant breeding. It would be great to have a readable survey of the field, but I have not been able to find one. Anyone know of anything? And has resynthesis even been attempted for the banana? Answers, please.

One Reply to “Broadening the base for oilseed rape”