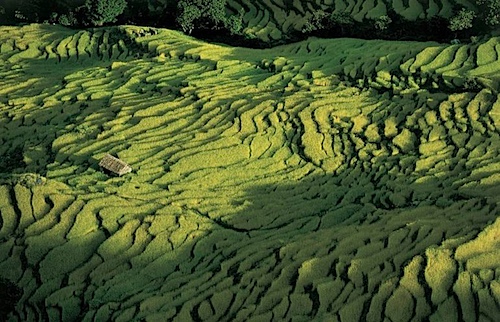 That image took my breath away when I saw it a couple of days ago. It shows rice terraces north of Pokhara, Nepal. The caption to the picture said that the economy of Nepal is based on agriculture,

“which employs 80 percent of the working population and accounts for 41 percent of the gross domestic product of one of the world’s poorest countries. Generations of farmers have tamed the mountainsides and prevented erosion by cutting terraces. Rice paddies thus rise in tiers as high as 9,800 feet (3,000 m) above sea level, covering 45 percent of Nepal’s cultivated land.”

The photo was one of almost 40 at a wonderful site called The Big Picture at boston.com. Two or three times a week Alan Taylor assembles a portfolio of outstanding photographs from around the world. This time they were by Yann Arthus-Bertrand, who has developed a wonderful technique of photographing nature and humanity from the air.

Many of the pictures that The Big Picture showcased depended for much of their impact on agriculture, and the patterns that human interference creates on the ground. This particular one caught my eye for two reasons. First off, it is very, very beautiful. Secondly, Pokhara is a famous name among some agrobiodiversity nuts (such as myself). I’ll explain in a minute. So, I made a note to come back and blog the story here when I had a moment. Imagine my horror, then, when I headed over to The Big Picture and found this note:

At the request of the coordinator of Yann Arthus-Bertrand’s upcoming exhibit, the number of photographs displayed here has been reduced to ten.

Pokhara had vanished. Yikes! That’ll teach me to procrastinate. But, knowing as I do the Dark Side of the Web, I simply assumed that someone, somewhere, would already have stolen it, and I was right. Lock, stock and barrel, the entire sequence of 38 images had been scraped by a nefarious site (to which I will naturally not link). They’d even had the gall to put their own credit on the image, a matter of minutes to excise. So, saved, by evil.1

Which brings me to the importance of Pokhara. The farmers there have been working with a local NGO called LI-BIRD and with Bioversity International to develop a local landrace of rice. After a concerted effort to find and then assess hundreds of versions of the landrace, the farmers came up with an improved version that was eventually registered with the Nepalese authorities as a “proper” variety that can be sold. That may not sound like much of an achievement, but take it from me: it is. But I had never seen the agricultural landscape in which this work was undertaken. Now that I’ve seen Arthus-Bertrand’s picture, I’m even more impressed.

You can read about Pokhareli Jethobudho at the web site of Bioversity International and at the International Development Research Centre in Canada, one of the donors that supported the project.

One Reply to “A landscape to marvel at”