The Royal Society Digital Journal Archive, dating back to 1665, is freely accessible until 1 February 2009. Enjoy it while it lasts, and read papers by Isaac Newton, Michael Faraday and Stephen Hawking.

In its announcement, the Society mentions a paper representing an applied biodiversity breakthrough: Edward Stone’s discovery that willow bark cured fevers, leading to the discovery of salicylic acid and later the development of aspirin. It is the best substance I have ever used.1

In his letter to the Royal Society (and they really were letters back in 1763), Stone explains how he did it. After accidentally (no further explanation) tasting willow bark, and noticing its bitterness, he suspected it might have properties similar to that of the Peruvian bark (i.e., of the cinchona tree, containing quinine). That willows grow in swampy areas was also a reason to suspect its usefulness against agues (malaria and other fevers), following “the general maxim that many natural maladies carry their cures along with them.” I suppose that today this maxim could be used for integrated pest management. 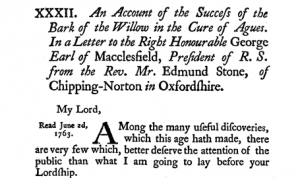 Then he applies the scientific method. Literature review: no mention of medicinal properties of the willow. Methods: 5 years, 50 persons, dose, comparisons and mixes with quinine, evaluation of side effects. The only thing missing in the 1760s is a control treatment. But who needs a placebo if the medicine never fails to cure?

Great man, great discovery? Well, willow had been in use for millennia, but perhaps Stone did not know, he did not have wikipedia.

The wikipedians also note that the use of willow “was forgotten by doctors in the middle ages but lived on in folk medicine.” This makes the accidental tasting a bit fishy. Sounds to me like the story of a bio-prospector who took off along a winding path, talked to an old lady, and was too vain to acknowledge her. Pure speculation, and I am glad he did the experiments and wrote that letter.

Stone was a terroirist: “Few vegetables are equal in every place; all have their peculiar soils, where they arrive to a greater perfection than in any other place.” Mustard seed from Durham; saffron from particular spots in Essex and Cambridgeshire; cider apples from Herefordshire; valerian from Oxfordshire and Glocestershire.

He gathered his willow bark from trees in northern Oxfordshire, where “soils are chiefly dry and gravelly”. And thus he suspected that stronger stuff could be found in other – moist and moory – parts of the kingdom. A modern genebank manager could have reasoned the same way.

Any other nuggets on agricultural biodiversity in these archives? We have until February to dig for them. After that: please report on all peculiar tasting substances you encounter, particularly if bitter, and whether ingested by accident or not.