There are 10,159 organic farms in the US1 and, unlike farms in general, they are distributed around the country in a series of distinct hotspots. I know this because the NY Times did its usual wondeful graphics number on the USDA’s numbers. I wonder what Paul Krugman would have to say about these particular business clusters. 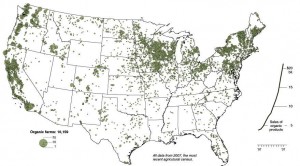 LATER: Oops, too fast on the old “Publish” button. If I’d waited to go live with the above until after browsing through my feed reader, I could have added that Food & Water Watch have a complementary map of factory farms in the US. Which I found out about via a story in the Atlantic Food Channel that was actually about something different, the global provenance of food.

LATER STILL: Alas, the map of organic farm distribution bears more than a passing resemblance to that for greed. Kinda. 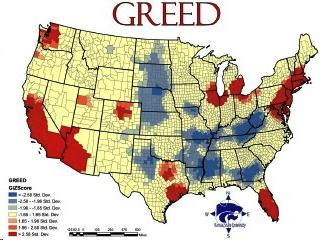