The Silk Road Symposium held at the Penn Museum in March 2011 was clearly quite a get-together, judging by the personalities involved. Some of the presentations are on Youtube, including one by Dr Michael Frachetti on “Seeds for the Soul: East/West Diffusion of Domesticated Grains,” which has been picked up and discussed by Dienekes on his blog. It’s really worth listening to the whole talk, even at 45 minutes, but in case you don’t have the time, here are the main points. 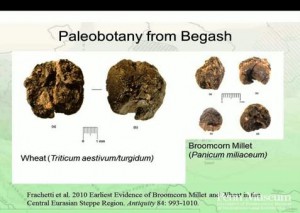 Dr Frachetti excavated at a place called Begash in Uzbekistan. This is a site which goes back to at least 2500 BC and was used by nomadic pastoralists for many centuries. The dig came up with the earliest evidence of wheat and broomcorn millet in Inner Asia, dating back to about 2200 BC. At left is what the seeds they found look like (click to enlarge). 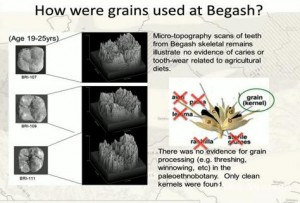 But here’s the thing. There’s no evidence that the people living at Begash at the time actually ate these things.1 Their teeth just don’t look like the teeth of people who have a lot of cereals in their diet. Basically, no cavities. And there was no evidence of processing either. So what was happening? 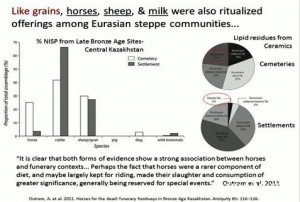 The seeds were recovered from a very particular context — a cremation burial. And only in that context. Along, incidentally, with horse remains. Both the cereals and horses were in fact ritual commodities, the excavators think. Not stuff to be consumed every day, but rather exotic commodities to be wheeled out on very special occasions to make an impression. As Dienekes points out, using wheat for funerary offerings goes on still. 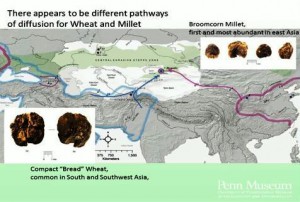 Where did the cereals come from? To cut a long story short, the wheat from the west and the Panicum millet from the east.2 Which is the reason why Dr Frachetti thinks we need to remap our thinking about Central Asia. It’s not so much that the people who inhabited these regions were peripheral to the great Bronze Age civilizations, but rather (or, perhaps, also) that they were the link between them.