This is a heartwarming tale of a group of farmers, isolated from the mainstream, seeking new products for a growing market, realizing that they have lost some of their traditional knowledge and their traditional varieties, and working closely with scientists in a participatory plant breeding effort to get what they need.

So far, so familiar.

The kicker is that these farmers are not isolated 3000 metres above sea level in a narrow valley. Nor are they eking out a living in poor red soils that are lucky to see 15 cm of rain a year. They are organic farmers growing cauliflowers and cabbages in Brittany in northwest France.1

Brittany has long been famous for its brassicas, notably broccoli, cauliflowers and cabbages. In the 1980s, breeders developed F1 hybrids that offered conventional growers the advantages of yield, uniformity and an extended harvest season. The first hybrid cauliflower was introduced in 1983. Before that time production was based on seed from open-pollinated populations raised on farms by growers who often specialized in seed production for their neighbours. While conventional growers were quick to adopt the range of F1 hybrids that the seed companies offered, organic farmers found themselves increasingly neglected.

They want seed breeders to respect both “the natural characteristics of species” and the “integrity of the organism”. The F1 hybrids, which require a form of male sterility developed by fusing two different types of cell, do neither. But conventional seed breeders do not find it worthwhile to develop varieties for organic farmers, a small market that actively seeks diversity and autonomy from the seed companies.

The organic farmers of Brittany are well organized. They have a professional body, Inter Bio Bretagne, and a research organization called PAIS (Plateforme Agrobiologique d’Inter Bio Bretagne Ã  Suscino). The French National Institute for Agronomic Research (INRA) has undertaken organic research since 1999 and in 2004 limited European Union support became available. the organic farmers and scientists decided to develop the brassica varieties they needed.

First they rounded up genetic resources from genebanks in France and elsewhere; Wellesbourne in the UK, Wageningen in the Netherlands, CHERAC in Switzerland and the Vavilov Institute in Russia. A European programme, RESGEN, had collected numerous heritage varieties just before the flood of F1 hybrids.

For each of these, the Euphytica paper goes into considerable detail. Cabbages, for example, were first grown out and assessed for marketable quality by the farmers and their advisers. the most promising — 7 of the 22 accessions evaluated — are being developed by mass selection at PAIS to make the varieties more suited to mass marketing. The growers adopted a similar strategy to improve autumn cauliflowers, where 8 out of 55 accessions are being pursued. Broccoli and cauliflowers with coloured curds are also in development.

The research side of developing new varieties was going well when, according to the researchers, “the next step occurred spontaneously in the field”. Farmers realized that although agricultural biodiversity, breeding and selection could give them the varieties they sought, they would then have to assure themselves of a supply of seed. “Some of them remembered having seen a father or grandfather producing and breeding seed.” Alas, they “did not remember the traditional know-how or were too young”. And the traditional methods covered only the traditional crops, not the new introductions. 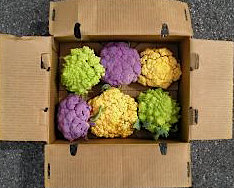 Working together, the farmers and their advisers are tackling these issues. They have introduced new varieties, with a label that mentions the role of PPB in their development. And they have re-established specialist seed farmers who supply seed for all in a collective framework. The big stumbling block now is European legislation.

Until now, the exchange of seed has remained an experimental dimension of PPB because of the current seed regulation which does not allow seed exchange of non-registered varieties. So, the seed legislation represents a limitation on the development of a “market” for seed from PPB. The term “market” is understood as all forms of gift, exchange, free or financial transactions.

The authors of the paper describe how poor farmers “from the Andes to the Himalayas and beyond” have made use of participatory plant breeding and have adapted local laws to make seed available to poor farmers. Europe lags far behind. As the authors say, “French seed legislation represents a limitation on the development of seed exchange by PPB”.

And not just French.

5 Replies to “Of cabbages and kings and laws and asses”