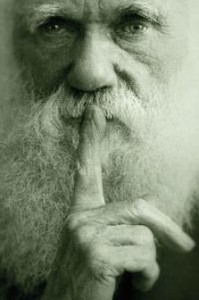 As the anniversaries of Darwin’s birth year (1809) and his Origin of Species (published in 1859) approach, London’s Natural History Museum has an exhibition on the great man. It takes you through his life and discoveries, paying equal attention to biography and biology. The exhibition opens with two mockingbird specimens, explaining their role in Darwin’s discovery of evolution. The famous finches are there, too, but apparently they played a less important role in the formation of Darwin’s theory. The most impressive part, I found, were the original letters exhibited, including a famous letter from his wife Emma, about religion, at the bottom of which Charles noted that he had cried about it for hours. The exhibition closes with a section on past and present responses to evolution theory.

Of course, I expected some stuff on agrobiodiversity. Darwin wrote a two-volume book on it, after all, The Variation of Animals and Plants under Domestication. Darwin used variation in domesticated animals and plants as a model for what happens in the wild. I wasn’t disappointed. The exhibition mentions dogs, horses and cabbages. It shows specimens of all the races of pigeons Darwin kept around Down House. Knowing Darwin’s hair style, I was surprised to learn that his London barber was an important source of information on domesticated biodiversity.

I’m not the only one who liked the exhibition. The lady at the bookshop said that the responses thus far had been very positive. It is on until 19 April 2009.