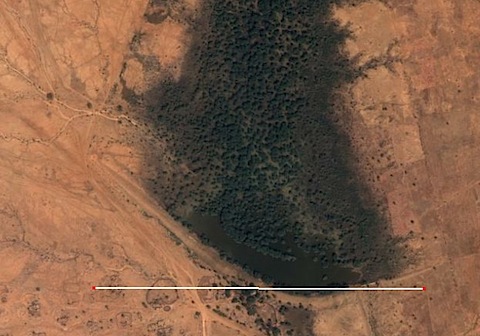 The picture, from Google Earth, shows a bit of Sudan in December 2003. The white line is 1 km long. I think that’s standing water just above the line, with quite large trees north of the water. How they got there made my jaw drop.

John Greenfield1 was working on a “Savannah Development Project” almost 40 years ago. The project required a D6 Caterpillar bulldozer to make airstrips for the project’s plane. In between times, John put the bulldozer to other uses:

I constructed a massive absorption bank across a dry Wadi in order to show the Sudanese, the importance of moisture conservation. I remember when I was building this bank thinking, you will be able to see this from the air.

And you surely can! As John points out, one of the big problems with desert soils is that they crust over, so that any rain that does fall runs off and does not penetrate. Slow the flow down, with any kind of barrier on a contour, and the water goes into the soil. John’s idea was for “linear farms” established behind vetiver hedges.

Once you have collected runoff from a wadi, and let it soak in to the soil you can grow some very useful crops that would have been impossible without the moisture conservation. The biggest problem with deserts is uncontrolled runoff â€“ hence my idea of â€˜Linear farmsâ€™ behind vetiver hedges â€“ a farm 10m wide X 1000m along the hedge equals 1 ha. That is a hectare of land that would produce well, as opposed to the thousands of hectares of little farms producing a few survivors of what was planted.

When I worked in this desert, I use to visit these little farms and talk with the farmers ( who made their money out of collecting Gum Arabic, and were bloody well robbed) We would look at their â€˜farmâ€™ and there would be a dozen or so stalks of sorghum waving in the breeze and I would ask why they thought those plants grew well when the rest failed â€“ no idea â€“ on closer inspection of the surviving individuals, they were all, without exception, growing in hollows in the field that the runoff had collected in. Now, I said, if we extended these â€˜hollowsâ€™ around the contour or across the slope (made contour furrows) then all the seed would flourish. And doing just that enabled me to produce the heaviest crops of Sorghum this area had ever seen.

Did anything ever become of the idea? I doubt it, or we would surely have heard about it. But it seems on the face of it a brilliant technique for using agrobiodiversity to enable farmers to grow more agricultural biodiversity.