You may remember I threw a bit of a hissy fit some time back when my mother-in-law was forced to cut down some of her eucalypt plantation as part of a Kenyan government effort to combat the drought that was plaguing the country (it has since broken in a big way, causing much flooding in places). Well, I was there at Christmas and saw the result for myself, and what really got me was not so much what she was forced to do, but the fact that the order is not being not uniformly applied. Have a look. 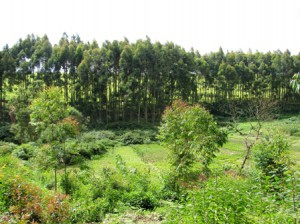 Now, a year ago I would not have been able to take that picture because of the thick stand of blue gums I would have been standing in. Gone now, of course, though some are beginning to re-sprout. But the question is: why weren’t the big-shot owners of the huge tea farm on the other side of the valley forced to cut down their eucalypts? They’re even closer to the stream than ours were.

Anyway, some good did come out of all this. More on that later.

4 Replies to “Cutting down (some of) Kenya’s eucalypts”