I promised to reveal a silver lining to the black cloud of my mother-in-law’s forced felling of part of the eucalypt plantation she’s been tending and coppicing forever, her main source of firewood, so here goes. The sight of the newly bare patch of land made her start looking around for a source of seedlings for replanting, and a coincidental visit by some old friends of mine got her thinking that maybe she should go indigenous. At least partly, anyway. Eucalypts are too fast-growing to give up altogether. Her visitors were Lex Thomson and Randy Thaman, who I worked with in the Pacific, and were in Kenya for the International Agroforestry Congress. They noticed a few Prunus africana trees around her place, and told her about its potential. Lex has since left a comment about this on an earlier blog post of mine.

Anyway, after some searching around, Hilda (for that is her name) came across Mr Douglas Ndirangu Kirichu’s nursery at a place called Lari Forest Station in Uplands Division, a short drive along a passable dirt road from her farm. Mr Kirichu runs the Kimotu Environmental Group. He has about a hundred people who collect seeds from the surrounding forest, which he then raises to seedlings and sells, for KSh 30 each (that’s about USD 0.50). Apparently there’s a law that a community can only graze their animals in the forest if they also have a nursery raising indigenous tree seedlings for replanting. So that’s what Mr Kirichu’s group does. To the tune of about 30,000 seedlings when we visited him.1 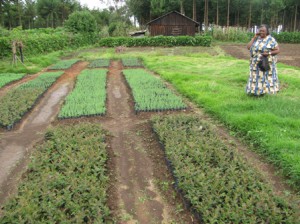 In addition to Prunus africana (mueri in Kikuyu), Mr Kirichu (that’s him on the left in the picture below) also has muna (Aningeria), mutamayo (Olea), mukoe (Dombeya), pondo and mukima (not sure what these are — maybe someone out there can help me?). 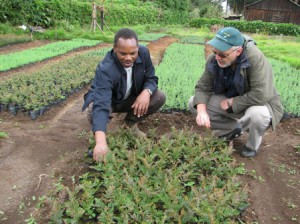 So we bought a couple of each, of course. And Hilda got a dozen mueri to start off her plantation. 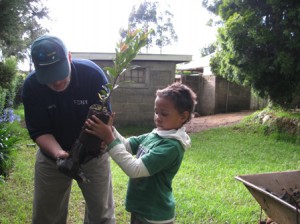 And we planted them both up at the farm (thanks, GK!) and down in Nairobi. Maybe that made the holiday carbon neutral? 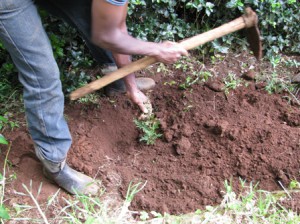 29 Replies to “Indigenous vs exotic trees in Kenya”