Mary Beard, classics professor at Cambridge and effective general-purpose public intellectual, knows how to get your attention:

That’s from a review, enticingly entitled Banter about Dildoes,1 of a book on Roman shopping with a much more boring title.2 Well, I defer to Prof. Beard on Greek footwear and Roman sex toys, but I’m not so sure about that cucumber.

To see why, let’s turn to a 2007 Annals of Botany paper The Cucurbits of Mediterranean Antiquity: Identification of Taxa from Ancient Images and Descriptions, by Jules Janick et al.:

Many of the Renaissance botanists identified the cultivated sikyos of the Greeks as cucumber. Observers of more recent times, including de Candolle (1886), Sturtevant (Hedrick, 1919) and Hyams (1971), have concurred. However, as de Candolle (1886) admitted, the origin of cucumbers is the foothills of the Himalayas. Although Roberts (2001) identified two ancient mosaic images as depicting cucumber (see Figs 3E and ​and 4B) the former is clearly Cucumis melo, as evidenced by the longitudinal split in the fruit, and the latter is Lagenaria siceraria, as evidenced by the obviously swollen peduncular ends of the fruits. Archaeobotanical records include findings of several seeds purportedly of cucumber, but it is extremely difficult, even for experts, to differentiate between the seeds of C. sativus and C. melo (Bates and Robinson, 1995). Possibly, an identification of the species of these seeds could be accomplished by analysis of ancient DNA (Gyulai et al., 2006). In this survey of Mediterranean iconography and verbal sources of Roman times, we have found no hard evidence of the presence of cucumbers. There is some linguistic evidence that they became known in the region during the early Middle Ages (Amar, 2000) but the earliest European image known to us of what can be unquestionably identified as cucumber is from approx. 1335, post-dating the Mongol invasions. Renaissance depictions of cucumbers, although very common, show much less variation than do those of melons, which is suggestive of their being more recently introduced or of their lesser culinary appreciation or economic importance.

I think it is worth reproducing those mosaic images. Hopefully Annals of Botany won’t mind. Here’s 3E, the slitty Cucumis melo. 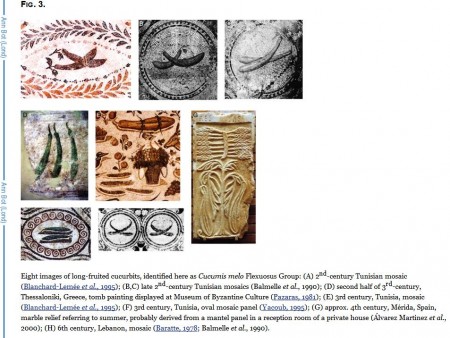 And here’s 4B, the knobby Lagenaria. 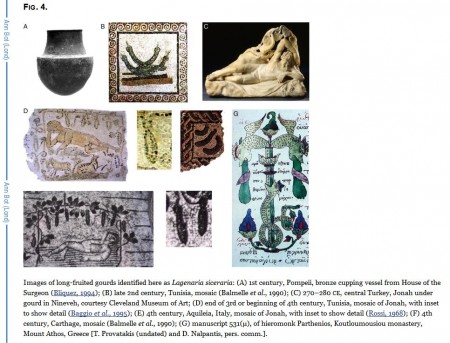 So, one can understand the mistake, but, pace Prof. Beard, that “famous variety of cucumber” was probably a famous variety of something else, either a muskmelon3 or a bottle gourd. Though, as you can see from the illustrations,4 that wouldn’t affect its comic potential. On the contrary…

3 Replies to “Banter about cucurbits”