Fermentation is absolutely my favourite food process. Not just for bread, beer and yoghurt, but also for proper pickled cucumbers.1 So when a bread-baking blog I follow wrote about recreating a long-ago taste of pickled cucumbers, my heart went pitter-pat. I read Joanna’s story, and skipped on over to the recipe itself. Alas, these are not proper pickles. Indeed at one point the author insists “Be sure that when you boil the vinegar for the second time that it’s a good full, rolling boil to kill any bacteria”. Not my kind of thing at all. I could have just called it a day, except that there’s another aspect to the story that got me going. The cucumbers themselves seem to be rather special. Not easy to search online for, because most search engines seem to think you’re interested in Asia, so I went all social and put a call out to my friends in places where they might know about these things.2

They are a group of cucumbers with thicker “flesh” than ordinary cucumbers. “The ‘Nordic Encyclopedia of Horticulture’ (5th edition 1945) names four varieties: ‘Dansk Asie’, ‘Langelands Asie’, ‘Middellang’ and ‘Ideal’”.

And he helpfully provided a photo. 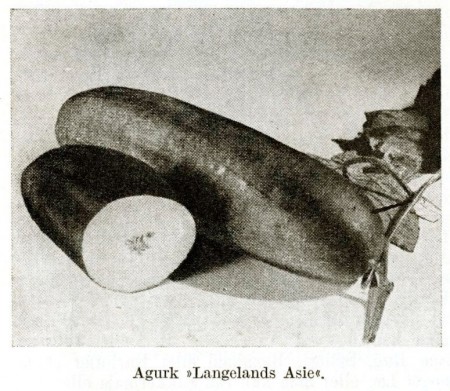 Though there’s something to be said for pickled cucumber seed cavity, it isn’t much, so now I was very intrigued. I turned, first, to the USDA’s descriptors for Cucumis. That offers two characteristics of interest: cavitydiam, measured in mm at the thickest part of the fruit, and frtdia_a, measured likewise in cm. A quick download and mashup, and I’d have a seed cavity to fruit diameter ratio for all the cucumber accessions! Unfortunately, although they are listed as characteristic descriptors for Cucumis species, I couldn’t find a way actually to search for them. Agriculture and Agrifood Canada was even less helpful.3 A document from ECP/GR mentioned flesh thickness and seed hull (which could be cavity or testa, I suppose) but was no more helpful.

Ah but … I had names! USDA knows nothing about the names from the Nordic Encyclopedia of Horticulture. The Garden Seed Inventory (6th edition) from Seed Savers Exchange does however list Langelang Giant4 and says it has “white flesh with excel. texture, small core”. Langelands Kæmpe (Langelands Giant) is still available in Europe and a similar variety called Fatum in Germany. The Seed Savers Exchange Yearbook for 2012, which lists all varieties offered by members, doesn’t seem to have any of the named varieties, although there are several that have larger or smaller cores than normal.

Most interesting, for me, was an entry for Danish Pickling in Vegetables of New York, Vol I Part IV, The Cucurbits.

This is a comparatively new variety which was introduced in 1912 by L. Daehnfeldt of Odense, Denmark … The variety produces fruits which are extremely large and long and thickly covered with fine spines. … Flesh medium thick, very fine texture, white in color, rather tart. Seed mass small and solid, with few seeds formed.

It is hard to tell how spiny Joanna’s Langelands is, but I think I see quite a few.

I couldn’t find much trace of any of the others in the Internet, with no useful sign of Ideal, probably because the word is just too common, even in conjunction with cucumber. However, the 1975 European Common Catalogue lists Ideal as a synonym of Delikateß added at that date, while Middellang was deleted from the common catalogue.

And there I came almost to an end. The name “asier” remained a puzzle. Were these Scandinavian favoured cucumbers originally from Asia? No, said Ove. “Asie (singular, asier is the plural) comes from Indian/Persian achár, originally meaning ‘bamboo shoots pickled in vinegar and spices’.” To which Stephen added “Wonder if it’s related to the as- in asparagus which also means shoot, also from west Asia..?” Over to you, philologists.

And what have I learned? That it remains incredibly difficult to find varieties with specific characteristics, even when you know what you’re looking for. That a cucumber with a small seed core is probably a great idea, even if you’re not planning to ferment it. That I would quite like to try growing it (hint, hint).

Oh, and that not everyone is as keen on fermentation as I am. If you want to get a bit deeper into it, can I recommend this very introductory podcast, in which, among other gems, Sandor Katz – fermentation revivalist – expressly compares the value of diverse microbes in fermentation and diverse varieties on farms?