You may remember an old blog post of mine over on the work website describing how an impasse over access and benefit sharing arrangements relating to “digital sequence information” (DSI) on plant genetic resources scuppered the most recent round of Plant Treaty negotiations.1 No? Well, this is how I put it at the time:

Some countries, and many civil society organizations, contended … that seed companies would soon be able to produce and market new varieties simply by manipulating genomic data in open-access repositories. That is, without needing to access actual seeds, and thus triggering the ABS provisions of the Treaty. In their view, this is a loophole that should be closed.

Others said that this is far-fetched, and that DNA sequence data needs to be freely available for researchers and breeders to do their work properly, and deliver new, better varieties, faster. Charging scientists for using genomic data, even if a way could be found of doing it, would impede vital research.

I was a bit worried about the binary at the time. It was an easy — though maybe a bit lazy — way to summarize the situation, but surely there was room for nuance? That was brought home to me by a recent paper from the project Wissenschaftliche Lösungsansätze für Digitale Sequenzinformation (Scientific approaches for digital sequence information) from the German Federal Ministry of Education and Research.

And the paper is actually a great contribution to the cause of finding a workable middle way. It’s worth reading the whole thing, or at least the executive summary, but basically, it suggests 5 options: 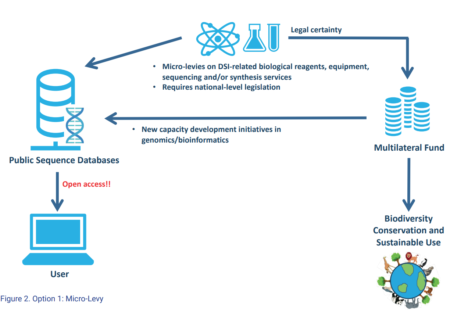 Do any data jockeys on here care to share their thoughts?

One Reply to “A way forward on DSI?”