Salavatore Ceccarelli is a researcher at ICARDA, the International Centre for Agricultural Research in the Dry Areas. In response to our post about barley diversity he sent this article, about how farmers and researchers are working together to use biodiversity to improve production and stability. As he concludes: Farmers are being progressively empowered, as indicated by one of the participating farmers who said, “we feel we have taken back science into our own hands.”

Eritrea is among the 10 poorest countries in the world, with GDP per capita of US$160. The economy is largely based on subsistence agriculture, with more than 80% of the population (~3.7 million in 2000 and growing at 3.8% per annum) living in rural areas and depending on farming and livestock production. The staple crops are barley (16% of total food production) and wheat, mostly produced in the highlands, together with cool season food legumes (lentil, chickpea and faba bean), which provide most of the daily protein requirement.

In 1997 it was estimated that two thirds of Eritreans were undernourished, and 40% of children under the age of five were malnourished. Approximately 30% of food consumption comes from food aid. Land degradation is extreme as a result of deforestation (from 30-40% to less than 0.1% now) and over-grazing over hundreds of years. 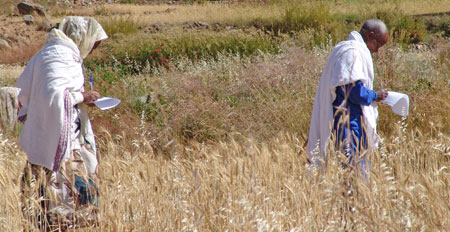 Eritrean farmers assess the crops in their fields

The prolonged and very dry season, roughly from November to April, means that the fields lie as bare cultivated fallow for many months, ready for planting as soon as the rainy season starts. Rainfall (500-700 mm per annum) is highly erratic and variable, and most falls during a short period between June and August. The start of the rainy season is also highly erratic in terms of time and amount. There are small pockets of irrigation in the river valleys of the Atbara basin, mostly for vegetable production, through small dams and groundwater pumping.

The country, like its neighbour Ethiopia, is rich in diversity for all the most important crops. Diversity is also part of the culture of the farmers who cultivate diversity in several ways. They grow different crops and different cultivars of a given crop and also grow landraces that are a mixture of different genotypes. They also cultivate two different species, usually barley and wheat, in a system known as hanfets or hanfetz (a Tigrigna word which means mixture of different things). 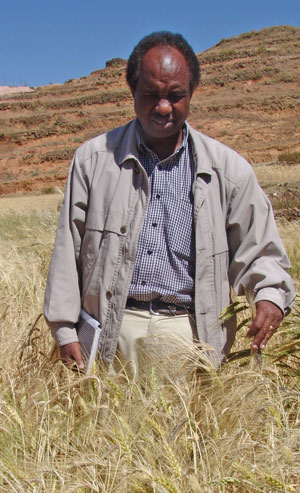 Hanfets, which is also common also in Tigray, the most northern region of Ethiopia, is a highly sophisticated way to cope with the very unpredictable nature of dry lands that will become increasingly more unpredictable with climate change: wet years favour the higher yield potential of wheat, dry years favour the better drought tolerance of barley, the incidence of diseases (particularly rusts in wheat) is reduced, and, as farmers claim, the bread (Kitcha) made out of the mixture tastes much better (and is more digestible) than wheat or barley bread. Pictured left, Professor Woldeamlak Araia1 of the Hamelmalo College of Agriculture is a pioneer in working with hanfets.

The Challenge Program on Water and Food of the Consultative Group for International Agricultural Research (CGIAR) is funding a project2 to enhance food security and alleviate poverty in the Atbara river basin (which drains into the Nile). The project’s activities include selection, development and adoption of improved varieties of barley, wheat, and legumes, establishment of systems for rapidly providing locally adapted improved varieties, and strengthening the capacity of the national researchers to undertake participatory research. The project has four major features:

Among the major achievements, farmers have increased yields by up to 20% in barley, 31% in wheat, almost double in lentil, and 6% in faba bean. They have done so by selecting within their local landraces, under their usual system of management. As the genetic resources available in the National Gene Bank are being evaluated, new collections as well as crosses between the superior landraces are planned to generate a continuous flow of germplasm into the participatory breeding programs.

The introduction of additional genetic diversity into farmers’ fields, from which farmers will select the best locally adapted material, corresponds to the habit of Eritrean farmers of going out of the village to seek novel cultivars of the various crops, bringing few seeds back to the village, and starting to experiment with them: a number of cultivars were produced in the past in this way.

Farmers are being progressively empowered, as indicated by one of the participating farmers who said, “we feel we have taken back science into our own hands.”