A propos of the peanut’s past, it just so happens that one of the great peanut people of the world (as immortalized in this specific epithet) now lives just down the corridor at work. So I showed him that article. He was well pleased to see it, explaining for me how it confirmed previous ideas based on crossing and geography. Then, on the way out, he casually mentioned that seeds of one of the ancestors had been collected only once, and that it had never been found again.

Well, that certainly adds a certain spice to an otherwise moderately routine story, I thought. So at the first opportunity I asked Luigi, who understands these things, to gbif A. ipaensis for me.1 Quick as a flash, he sent me arachis.kml, a KML file for Google Earth. There were precisely two entries, one for the type specimen at the Missouri Botanic Gardens and one for an accession in the USDA genebank. To me, they looked suspiciously located, on exactly the same latitude but about 45.5 km apart. And while the USDA’s specimen was reasonably near to a stream, Missouri’s was nowhere near water that I could see. 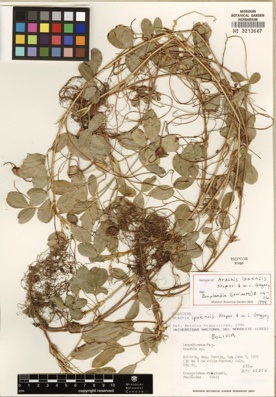 Luigi quickly confirmed that the Mo specimen, collected in 1971 and thus well pre-GPS, was probably in the wrong place; OK. These things happen. Then he was on the IM again, telling me thatÂ I could look at an image of the type specimen (that’s it over there) and that the USDA specimen was “unavailable”.

“Could be dead. Could be regenerating and they don’t have stock.”

And then we went about our independent business for a while until he sent “Can you imagine how hard that would have been 10 years ago? Or even 5?”

And it’s true. A few quick clicks, some very spiffy intertube tools, and we had the kind of information that could have taken months to gather back in the day. Information is going to be the life and death of efforts to conserve and make use of agrobiodiversity. And easy though it was to find out a bit about A. ipaensis, we don’t really know anything about the plant itself. Is it drought tolerant? Disease susceptible? Fertile with A. hypogaea? Got good genes?

And, in other Arachis news:

That’ll do, for now.

2 Replies to “Stalking the wild peanut”