Good news from our friend Hannes Dempewolf, of the University of British Columbia. Congratulations to all involved!

Last Friday was the day of the big decision on whether we had made the cut and would be pronounced a winner at this year’s Development Marketplace competition of the World Bank. An event geared towards innovative approaches to agricultural development, the competition was very tough. Nevertheless, the jury seemed to like our idea of establishing a DNA-fingerprinting based system of traceability for ancient cacao varieties and declared this Bioversity International-led project a winner, together with 21 others, including another on cacao that dealt more specifically with organoleptic assessments of Ecuadorian cacao diversity. Generally, agricultural biodiversity featured big time at the competition, with several project proposals on neglected and underutilized species as well as diversity driven value chain development approaches for coffee, or in our case cocoa. 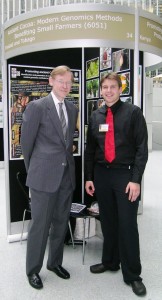 After the excitement of the award ceremony had settled, some World Bank staffers approached me and told me that one representative of our project, as well as of two other projects, had been selected to meet the president of the World Bank, Robert B. Zoellick, for lunch.1 This certainly came as a big surprise and all three of us were somewhat unsure what to expect, since the World Bank staffers had made clear to us that this would be a meeting of utmost rarity since the president usually never does lunchtime meetings and he only this morning had arrived from the UN’s annual general assembly meeting in New York City. After such a build-up, I was quite nervous and had eaten way too many cocoa nibs from my display stall before the president eventually arrived at my booth to learn from me about our proposal. He seemed very keen to hear about our project idea and to my surprise was particularly interested in the more technical details, which I had not expected from an economist of his stature. He asked me how we came up with our idea and what had lead us to submit the proposal, which I had no problem explaining with my enthusiasm on agricultural biodiversity and my belief in a “conservation through use” philosophy. We were then guided upstairs to his office facilities where we were offered lunch with the president as well as a few other World Bank staffers and past winners. He seemed very keen in the Development Marketplace competition per se, since it is one of the rare occasions that the World Bank offers direct assistance to more grassroots organizations rather than big government ones.

The table conversation was largely focussed on our proposed projects and he asked everyone in turn quite detailed questions on the wider framework and relevancy of the problem, which they were trying to solve with their proposals. At the end of the lunch he asked us whether anyone had any final remarks, at which point I mentioned that I was very impressed by the diversity and high quality of the project ideas that had been presented by the 100 finalists of the competition and whether there wouldn’t be a way to increase the funding pool in future years to give more finalists the chance to implement their great ideas. He seemed to think it might be possible with the help of additional donors, which everyone was happy to learn. We then all returned from the executive level high up in one of the wings of the World Bank building down to the inner courtyard of the bank and proceeded to join the other finalists at a special policy dialogue on “Cultivating Innovation: A Response to the Food Price Crisis” that had been offered as final event of these exciting four days.