A message to the CropWildRelatives mailing group yesterday really piqued my interest:

The Julius Kühn-Institute has launched a new version of the Crop Wild Relative Information System (CWRIS) – AEGRO – Population Level Information System (PLIS) = CWRIS PLIS, originally set up to locate Beta occurrences within protected areas in Europe. The PLIS for Beta is functioning while work continues on Avena, Brassica and Prunus.

As the project ends in September 2010, JKI would be grateful to all those willing to test the system and send their feedback to allow further improvements. It also declines any responsibility with regards to the data content as they have only compiled the data from various sources and did not generate the data.

For more information and to test the system visit the AEGRO Home.

So of course I did. The interface is not hugely attractive but workable.1 You can search by location, protected area, taxon or taxon + locations. You can see the results as a list (downloadable), in Google Earth or as a kml. This is what you get for Beta corolliflora, which is nice enough. 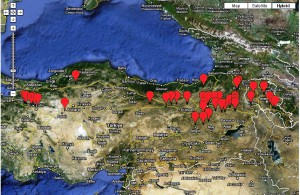 But it’s not so much more than you get with GBIF, and there you get synonymy information as well, and the possibility to do some niche modeling. 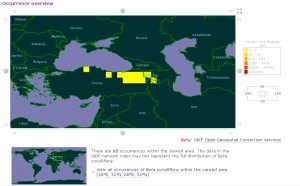 And in neither case is it easy to download an image. However, AEGRO does mash up the crop wild relatives distribution data with protected areas. Now, this is not a feature that is particularly easy to explore, as there are over 400 protected areas in the system. If you don’t a priori know of one that has a Beta wild relative, you’re left to guessing. If you’re an idiot like me, that is. The other thing you can do is simply look at the records list for a given species and find if it is known from any protected area. Anyway, after a few minutes of trial and error, I eventually found a protected area in Cyprus which has a record or two for Beta vulgaris var. maritima. Well named, because it seems to be growing offshore, but that’s clearly a problem with the original data the system is harvesting. Caveat emptor, as ever in genebank database hell. 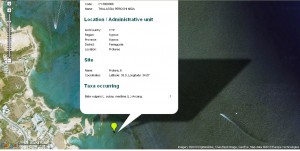 So it looks like the only real extra over GBIF is the fact that you can search for the crop wild relatives in specific protected areas. But even then you don’t get in the final map any indication of the geographic boundaries of said protected area. That would be my main recommendation for improvement.

Data quantity? AEGRO has 15,935 geo-referenced occurrences of Beta, and 8,460 records without geo-references. GBIF has 12,795 geo-referenced records from a total of 23,529. Not really that much in it. Disappointing, overall, I have to say. But there is time before the end of the project.