Our friend and occasional contributor Jacob van Etten has been busy. He has a piece out over at the CCAFS blog describing his work in India on crowdsourcing the evaluation of wheat varieties in the context of climate change adaptation which has been attracting some attention. He’s blogged here before about getting seeds out to farmers, but he’s also published a bit more formally on the subject, and seems now to be putting his theories into practice now at Bioversity. More power to him. If you’d like to hear him explaining his work, rather than just reading about it, you can do that too.

A bit surprisingly, Jacob doesn’t particularly highlight1 the role of genebanks in his CCAFS piece. It would be interesting to know why. Perhaps he can tell us here. Or on his Twitter account. Anyway, I’ve found a diagram on his Facebook page which suggests that he does think genebanks have a key role to play in diversified and resilient farming systems. Here it is, for those of you who are not his “friends.” 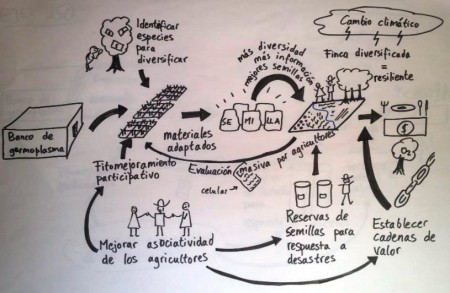