Attentive readers may remember a post from some years back about the return of TePuke rice from IRRI’s genebank to New Zealand. Via our friends at IRRI, here’s photographic proof from Tony Olsen, a local farmer, that he actually planted that variety at what would be a world record southern latitude for the crop (even further S than Rocha, in Uruguay)… 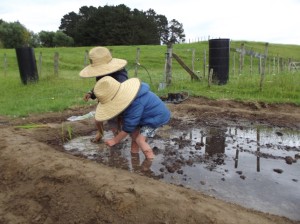 …and that it actually grew, despite a not very sunny summer.

We wait to see whether there’s a decent harvest.

Incidentally, although IRRI was able to send Tony some seeds of TePuke, he says that:

A friend of mine helped me track down some TePuke Gold Rice seeds from the widow of the gentleman who supplied them to the NZ authorities that forwarded them to your institute in the 1970’s.

Which just goes to confirm that people really like holding on to their seeds.

Anyway, what with dire predictions about what will happen to rice yields in its Asian heartland, it might well be that places like New Zealand and Uruguay, now on the edge of the crop’s range, are going to feature much more prominently in the future. Maybe even parts of Japan, which has a young breed of farmers coming through who I’m sure are just itching to take on such upstarts.