Nice to see the first National Atlas of Food and Development launched in Iraq, courtesy of the Ministry of Agriculture and ICARDA. You can find it here. You can map various agricultural and development indicators (although some of them don’t seem to work), including harvested area and yield of a number of crops. Here’s barley yield: 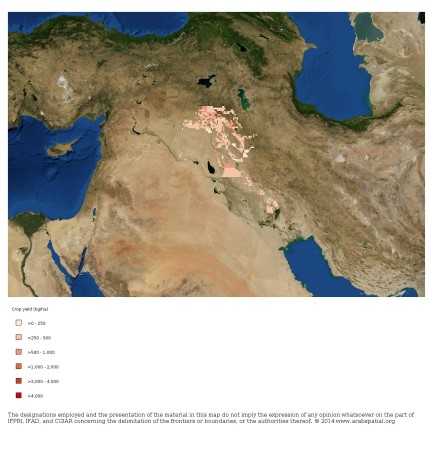 You can export the map as an image (as above) or as a URL, which is good but insufficient. Because one would like to mash it up with other datasets, like for example germplasm holdings, right? You know what’s coming next, and here it is, the locations of Iraqi barley material in Genesys: 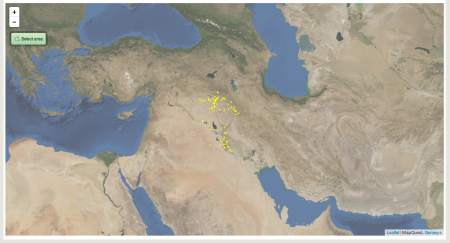 And yeah, I know, it takes two to tango, and it’s not exactly easy to share that Genesys data either, less easy than sharing the Iraqi atlas map if we are honest. We’re working on that…

But in the meantime, my colleague Matija and I spent the best part of a day hacking both tools and were eventually able to import image files from the Iraqi atlas and from Genesys into Google Earth. It’s not perfect, not even close, but here’s our first attempt at mashing up barley yield in Iraq (the pinkish squares) with the location of germplasm samples from that country in the world’s genebanks (in yellow). 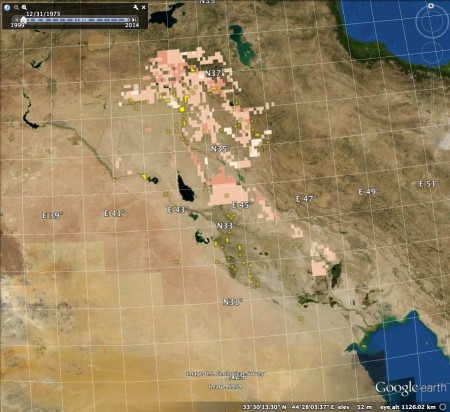 So, possibly some areas where further collecting might be warranted, conditions permitting. But is there an issue with the barley data in the atlas? You see that horizontal line right in the middle of the image, where barley apparently abruptly disappears south of latitude 33.5°N? That looks a bit suspicious, especially as the Genesys data seems to suggest that barley cultivation extends southwards along the Euphrates.