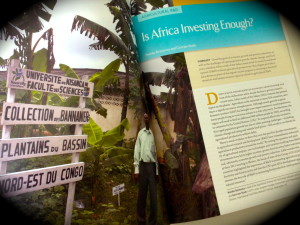 IFPRI’s latest Global Food Policy Report is out. I know because I was at the launch a couple of days ago in Berlin. Leafing through the hard copy while listening to IFPRI’s DG summarize the main findings, I was heartened to see the photo reproduced here, at the start of the section entitled “Is Africa investing enough?”. It’s a banana genebank! In a publication on food policy? Will wonders never cease?

Unfortunately, they did. There’s nothing at all in the report about genebanks, apart from that photo. That’s despite the fact that another section, the one entitled “The promise of innovative farming practices,” did a great job of highlighting the importance of interventions that ultmately depend on the genetic diversity found in genebanks. IFPRI researchers used a geographically explicit modelling approach to predict the effect of 11 different agricultural technologies on yield, global harvested area and number of people at risk of hunger in 2050. They did this for three major staples: maize, rice and wheat.

It turned out that of the three breeding-based technologies included among the 11 — that is, new varieties that are more heat tolerant, N-efficient or drought-tolerant — the first two were consistently the ones resulting in the greatest impact. No-till agriculture was also up there. But really, if you were going to do just one thing to alleviate hunger, breeding for N-efficiency would probably be it, according to this analysis.

So why not mention the source of the raw materials for doing that? Especially as IFPRI’s fellow CGIAR centres manage global germplasm collections of these crops which have been formally recognized as fundamentally important to food security (check out Article 15 of the International Treaty for Food and Agriculture). It’s amazing how no opportunity is ever wasted of taking genebanks for granted.

3 Replies to “Food policy ignores genebanks, so what else is new?”