Readers with a long memory will remember the Global Crop Loss Survey, which we blogged about here back in November. Just to remind everyone else:

Over a period of three months (November 2016 – January 2017), 1142 responses from 216 respondents in 67 countries were recorded during the Global Crop Loss Survey organized by the Crop Loss Subject Matter Committee of the ISPP [International Congress of Plant Pathology]. This appears to be the first Survey of this kind ever conducted.

Well, some preliminary results are out.

The money table is this: 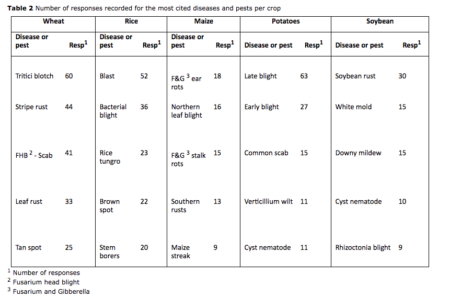 Would be interesting to compare these data with the investment being made in breeding against, and indeed in germplasm evaluation by genebanks for, different threats. Analysis is continuing…