The UN Statistics Division (UNSD) is responsible for bringing together data on the Sustainable Development Goals, and does a generally pretty good job of explaining the just-agreed targets and indicators on its new(ish) website. Let’s remind ourselves that Goal 2 is: “End hunger, achieve food security and improved nutrition and promote sustainable agriculture.” And that Target 2.5 and its associated indicators are as follows:

The UNSD website presents the challenge under the heading: Increased efforts are needed to achieve the 2020 target on maintaining genetic diversity. But what’s the baseline? Here’s what it has to say specifically on genebanks (Indicator 2.5.1):

By the end of 2016, 4.7 million samples of seeds and other plant genetic material had been conserved in 602 gene banks across 82 countries and 14 regional and international centres. Over the past 11 years, the rate of increase in gene-bank holdings has slowed.

There’s even a graph: 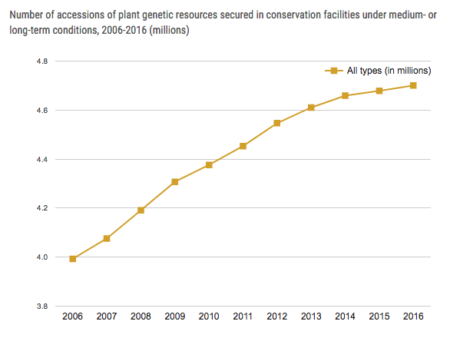 These figures, however, are a bit of a departure from the ones we usually use, which come from the Second Report on the State of the World’s Plant Genetic Resources for Food and Agriculture (SoWPGR2). That said there were 7.4 million accessions in 1,750 genebanks in 2010. This is from the “synthetic account” of SoWPGR2, a kind of executive summary: 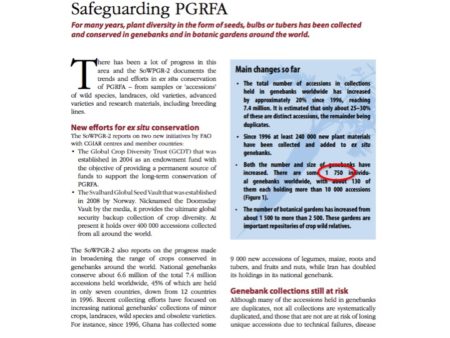 Have 1,148 genebanks up and disappeared? No, I don’t think so. What’s happened is that UNSD is using data from FAO’s ongoing efforts to monitor implementation of the Global Plan of Action on PGRFA, and prepare the third SoWPGR, and these are still incomplete, not all countries having reported yet (there’s a couple of years still to go on that process, but an update was provided to the FAO Commission on Genetic Resources for Food & Agriculture earlier this year). Likewise, 2 million-odd accessions have not gone up in smoke. It could be just incomplete data again. Or maybe UNSD is using data on Annex I crops only? The metadata behind the UNSD information on Target 2.5 refers to “unique” accessions in long- and medium-term conservation, rather than total number of accessions, so it could be that too. Here’s the relevant excerpt from SoWPGR2:

Based on figures from the World Information and Early Warning System (WIEWS) and country reports, it is estimated that about 7.4 million accessions are currently maintained globally, 1.4 million more than were reported in the first SoW report. Various analyses suggest that between 25 and 30 percent of the total holdings (or 1.9-2.2 million accessions) are distinct, with the remainder being duplicates held either in the same or, more frequently, a different collection.

Anyway, I’m sure all this will be sorted out in due course. Let’s not quibble. It’s difficult pulling these data together from dozens of countries, plus regional and international organizations as well, and just having genebanks recognized as crucial to the goal of ending hunger is pretty cool, no matter how you count them.

4 Replies to “How many genebanks are there in the world?”