By investigating llama poo, a new study just published in the Journal of Archaeological Science by a team from University of Sussex and the Natural History Museum, may not only be shedding light on the collapse of the Inca Empire, but on megafaunal extinctions too. The lead author, Alex Chepstow-Lusty, who has blogged us for us before, has sent us the following. Thanks, Alex, and keep the crap posts coming. Simon Crowhurst, Earth Sciences, Cambridge University drew the cartoon.

It has been said that the triple whammy of guns, germs and steel led to the rapid collapse of the Inca Empire with the arrival of the Spaniards in the 1530s. This was probably the first proper contact between people of the Old World and those of South America for over 10,000 years. As a result, within a few years, the Inca Empire, that stretched from what is today the Colombian border down to the middle of Chile, and might have contained over 10 million people, had dissolved, with a large proportion of the population rapidly succumbing to introduced illnesses. Historical accounts, which started at this time as the Inca probably had no writing, even report that their llamas, which were vital to the economy as sources of wool, transport and dung for fertilizer, contracted diseases and were buried in large pits. 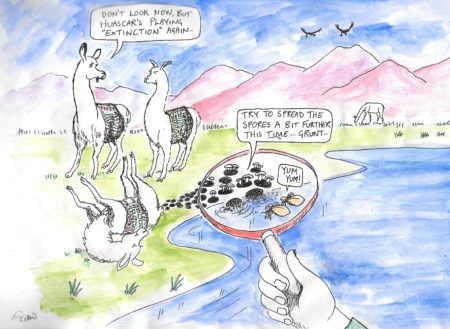 A team from the University of Sussex and the Natural History Museum has been looking at this process in a slightly odd way in a paper that has recently been published in the Journal of Archaeological Science.

As first author Alex Chepstow-Lusty says, “Such a classic catastrophic collapse of both indigenous people and their domesticated animals with the sudden arrival of a destructive new culture would be expected to have made a major impact on the environment. Yet, surprisingly, archaeologists do not have many techniques in their tool box for accurately revealing the changing relationship through time between the numbers of humans and their livestock, whether here in the Andes or elsewhere around the world.”

In recent years, however, a method has been heralded where counts are made of the spores of a fungus called Sporormiella that grows on large herbivore excrement. Deposited in the layers of sediments, particularly of lakes, the abundance of these dispersed, well-preserved spores has been used to provide a history of livestock in the landscape, and even supposedly reveal the extinction of megafauna in different parts of the world. However, unlike megafaunal extinctions which might be linked to climate change, the collapse of the Inca was indisputably caused by the arrival of Europeans in Peru a little less than 500 years ago, but the details of it have never been tested using Sporormiella spores.

As co-author, Michael Frogley says “There have been an increasing number of dissenting studies that question whether Sporormiella fungal spores are really telling the true story of large herbivores on the landscape: one of the problems being that the spores are dispersed only short distances of a few metres close to the ground, attaching themselves in glutinous little packets to the vegetation, subsequently eaten by livestock during grazing and appearing again with the excrement in which they germinate if the conditions are right. But most of the sites investigated are large lakes. Just how do the spores get deposited in the centres of these large lakes where the sediment cores are extracted from? And that is why other techniques need to be used to check these results.”

So, the team investigated a little lake — more of a deep pond really — called Marcacocha, close to Cuzco, the religious and administrative heart of the Inca Empire. At the height of the Empire, caravan trains of up to a thousand llamas using a nearby trading route would stop at the lake to graze on the surrounding pasture.

Also found in the lake sediment layers with Sporormiella spores were oribatid mites (relatives of spiders). Across a period spanning the last 1200 years, the abundances of both spores and mites were compared in the sediment layers: the Sporormiella spores are around 40 times smaller than the oribatids, which themselves are only about 0.5 mm in length.

As co-author Anne Baker of the Natural History Museum notes “Aquatic oribatid mites belonging to the genus Hydrozetes were most common. Their numbers clearly traced the rise and rapid collapse of the Inca Empire, as reflected in changes in size of the passing llama caravans. Hydrozetes even showed a peak when the Spaniards introduced their animals from the Old World, like cows, horses and sheep, and a dip when these animals disappeared because there was no-one to care for them after smallpox arrived around 1719 and killed nearly all the surviving indigenous people in the area.”

“Changing food supply is a strong candidate for causing the fluctuations in numbers. These mites feed on decomposing plants, which could have included dung ending up in the lake from the llamas and later from the introduced livestock. Also, the mites might have responded to differing amounts of dung and urine draining into or being deposited in the water over time.”

However, as Alex Chepstow-Lusty observed “Sporomiella spores bizarrely showed no such signal as Hydrozetes — only showing high abundances when lake levels were already low and they were washed in with other material, or when the lake filled up with mud, and subsequently deposited peat. This allowed animals to graze and defecate close to the centre of the lake, with the spores of the fungus only having to travel a short distance.”

“This shows that this technique may be a blunt instrument, and rather gives information about animals getting closer to the centre of the lake to defecate, rather about animal numbers themselves.”

And as Michael Frogley continues, “Sporormiella is a bit like Goldilocks. The fungus will only grow on the excrement if it is not too dry or not too wet, but has just the right amount of moisture. Getting these ideal conditions may be a bit of a problem for achieving its reproductive cycle.” 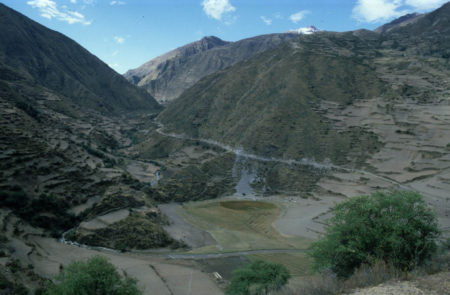 “We should also not forget that llamas defecate communally, and that the excrement, which is called llama beans, is a vital part of the Andean economy when dried, providing one of the best fertilizers in the world, and is much valued at high altitudes for cooking and heating where trees are thin on the ground.”

As Anne Baker concludes, “Mites are useful in archaeological analyses because their ecology evidently has not changed through history, so, by identifying them, we can get a picture of conditions when they were alive. More, however, still needs to be known about the identity of fossil mites and the ecology of modern ones. We have looked at one small lake in Peru, but the technique we have used does appear very promising and could be applicable elsewhere.”