A somewhat cryptic comment a few days ago on a year-old post on domestication eventually led us to an intriguing 2007 article in The Times which we unaccountably seem to have missed the first time around. The article quotes liberally from a Journal of Archaeological Science paper which puts forward something of an unorthodox take on chickpea domestication.1

The authors, from various Israeli institutions, start by saying that chickpea is an unusual member of the “founder package” of Middle Eastern crops, which also includes diploid einkorn wheat, tetraploid emmer wheat, barley, pea, lentil and bitter vetch. That’s because its wild precursor (Cicer reticulatum), unlike those of the other first crops, has a relatively narrow distribution and an indehiscent pod (that is, the pods don’t split open when the seeds are ripe), and the crop itself is grown in the summer rather than the winter, basically to escape the fungal disease Ascochyta blight. A rare precursor and a problematic agronomy: why bother with the damn thing? There must have been something special — or at least different — driving the domestication of chickpea. That something, according to the authors, is the amino acid tryptophan.

Free tryptophan levels are an average of three times higher in seeds of cultivated chickpeas compared to their wild precursor, but with a lot of variation among cultivars. The usual sorts of processing have no effect. The levels are such that the authors are able to suggest that “consuming domesticated chickpea will elevate the levels of tryptophan available for processes other than growth and maintenance.” What processes might these be?

So the authors are suggesting that early farming communities consuming wild chickpeas would have been more fertile, less hungry, less depressed, more accepting of social complexity, more innovative and more self-confident. Sounds like I should be eating more chickpeas. Anyway, recognizing the effect that eating these wonder grains had on their mood — and farm animals are apparently able to recognize high tryptophan feeds — early farmers would have selected for ever higher levels, leading to the domestication of the species: “it seems that the inclusion of chickpea in the founder crop package is best understood in light of its high nutritional seed properties.”

Well, it’s a great story, and I really hope it turns out to be true, although I’m not entirely sure how one might further test the hypothesis. Shades of the tale of the domestication of coffee. But I think it might be worth revisiting that initial assumption. Is chickpea really all that different from the other members of the founder package? The distribution of its precursor is certainly limited compared to some of the cereals (the map is courtesy of GBIF). 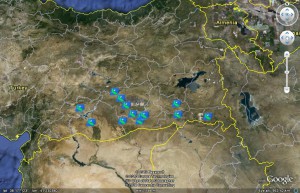 But wild lentils are not exactly common, and much more inconspicuous. And anyway we don’t really know what the distribution of C. reticulatum was like in the Neolithic. Its pollen doesn’t turn up in cores, according to one expert I asked, so it’s going to be difficult to reconstruct its ancient distribution and frequency. And why should seed indehiscence make chickpea a poor candidate for domestication? Wouldn’t it have been just the opposite? What about tryptophan levels in the other early legumes? And finally, as suggested by a former legume breeder I consulted, was Ascochyta blight a problem in the Neolithic? And is C. reticulatum susceptible to it anyway?

It does seem that perhaps the authors may have erected a bit of a straw man, which they then attacked with a very ingenious, utterly plausible, but ultimately unnecessary argument. But that’s not going to stop me eating my pasta e ceci a bit more often than before I read this paper.

2 Replies to “Early farmers got high on chickpeas?”