GoKunming, which seems to be a semi-official English-language site about the capital and largest city of Yunnan Province in southwestern China, has a feature today on the Germplasm Bank of Wild Species (中国西南野生生物种质资源库) at the Kunming Institute of Botany. It’s a nice write-up, although we would take issue with parts of the following statement:

Why is cooperation between the world’s seedbanks important? Staff at Kunming’s seedbank told us that during the recent social upheaval in Egypt, the country’s seedbank suffered looting (for the jars, not the seeds), which led to the destruction of many valuable specimens. Luckily, the seedbank had sent backup specimens to its partners abroad.

Though there has been extensive damage to equipment, I don’t think any evidence has been presented of the looting of jars from the Egyptian Deserts Genebank, if that is indeed the one referred to, or of the destruction of specimens, valuable or otherwise. And of course, although some accessions stored in that genebank were in fact duplicated, in particular at Kew’s Millennium Seed Bank, not all were. But it is nice to see the point about cooperation among genebanks made so clearly. 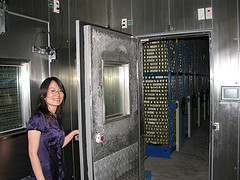 Just for completeness, the national crop, as opposed to wild species, genebank of China is in Beijing (left). China has not yet ratified the International Treaty on Plant Genetic Resources for Food and Agriculture.