As the numbers keep mounting, it is worth recalling where it all started. The epicentre of the swine flu outbreak seems to be the village of La Gloria in Veracruz. The Times has been there, of course:1

Residents of La Gloria have long complained about the clouds of flies that are drawn the so-called â€œmanure lagoonsâ€ created by such mega-farms, known in the agriculture business as Confined Animal Feeding Operations (CAFOs).

But they may or may not be behind the outbreak. In any case, CAFOs seem to be very different to the more traditional methods of pig rearing to be found in Mexico. The area is one of high density of production: 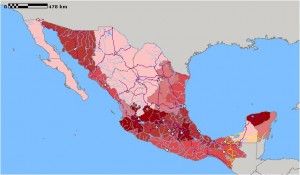 No word on which of the nine or so pig breeds recorded from Mexico are involved.

LATER: GRAIN has its say. And New Scientist.