Where should breeders look for traits like drought resistance among the landraces and wild relatives of crops? The FIGS crowd says: in dry places, of course. And they have a point. But it may not be as simple as that, as a recent paper on wild tomatoes shows.1

The authors looked at the diversity of two genes implicated in drought tolerance, nucleotide by nucleotide, in three populations of each of two closely related wild tomato species from the arid coastal areas of central Peru to northern Chile. Annual precipitation at the collecting sites ranged from 5 to 235 mm. As another recent paper put it, the tomato genepool “has both the requisite genetic tools and ecological diversity to address the genetics of drought responses, both for plant breeding and evolutionary perspectives.” Here’s where the populations came from: 1-3 are Solanum peruvianum, 4-6 are S. chilense. 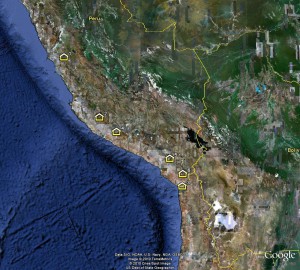 These places are pretty dry. Here’s what a close-up of the driest (number 3) looks like: 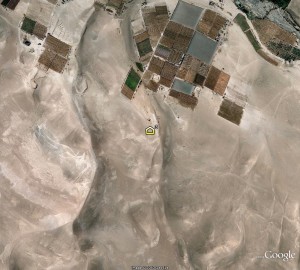 Anyway, Hui Xia et al. found evidence of purifying or stabilizing selection at one gene, called LeNCED1. So far so good. But they also found a pattern of variation at the other gene, pLC30-15, in one of the populations (number 4, S. chilense from Quicacha in southern Peru) which they interpreted as evidence of diversifying selection, where “two alleles compete against each other in the fixation process.”

Now, that would arguably be a more interesting population for a breeder to investigate than any of the others, but the observation “is difficult to explain based on the environmental variables of the populations investigated.” Ouch, say the FIGS crowd!2 But is it perhaps that the authors just considered average rainfall, and not how variable rainfall was at the site, from year to year? The best they can suggest by way of explanation is that S. chilense is an endemic with a very narrow ecological amplitude. In contrast, S. peruvianum is more of a generalist, with larger, expanding populations, found in both dry and mesic locations: “this may not be favourable for the occurrence of adaptive evolution, either because phenotypic plasticity can be promoted rather than local adaptation or because beneficial mutations are more likely recruited from the higher genetic standing variation.”

So, target dry areas for adaptation to drought tolerance, by all means, but the environment is not all, and some wild species may be more useful than others in providing interesting diversity depending on their ecological strategies and population dynamics.

One Reply to “Getting the most out of wild tomatoes”