Two papers describing interesting spatial datasets appeared in my feed reader today. One looks at global landuse change over the past 12,000 years. Here’s the historical course of cropland expansion; there’s a similar set of maps for pastures: 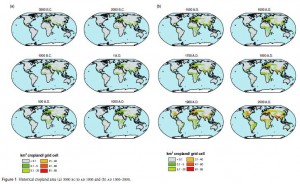 The other paper concentrates on Europe, mapping out the intensity and type of farming, the idea being that not all “cropland” is the same: 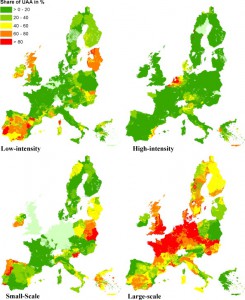 In both cases you should be able to get a bigger image by clicking on it. I guess if we’re ever going to be able to investigate the link between agrobiodiversity and livelihoods on a global scale,1 as people are doing with biodiversity and ecosystem services with poverty, we’re going to have to start with such datasets, enriched with diversity, including genetic diversity, data (or proxies).

How to bring in that diversity data? There are some ideas out there. But there’s a long way to go before we have a global picture of the current spatial distribution of crop diversity.

One Reply to “Spatial datasets in the limelight”