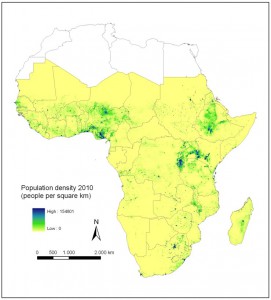 A few more huge spatial datasets for you this morning, as I deal with jet-lag in a Maryland hotel room at 4 am.

Today there’s a high resolution dataset of the population of Africa. And an analysis of wetland protected areas.1 And finally a global dataset of particulate matter pollution. This is presented from a human health perspective, but it could have applications in agriculture too.

I still want to know who’s keeping track of this stuff. Maybe you don’t need to, you can just google as the need arises, but somehow I doubt it. Would love to hear from the CGIAR’s spatial data consortium folks, if they’re listening.

Meanwhile, one of the participants in that consortium has announced that they’re updating one of their iconic products, the now oldish “Atlas of the Common Bean (Phaseolus vulgaris) in Africa.”

How long before they mash it up with that population dataset? And with the data on the location of genebank accessions, for example from Genesys.

Not that it hasn’t been done before, in a very crude way, as you can see in the map in Figure 2 below.

3 Replies to “Spatial datasets continue to proliferate, and evolve”