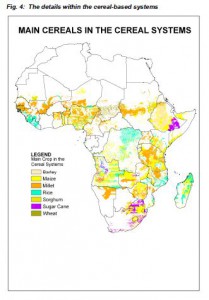 It’s over a year old, but I’ve only just learned about the ILRI publication “A production system map for Africa.” Looks interesting. I’ll just reproduce here the map showing the extent of different cereal-based system, with the main species involved. Looks like Angola is the most cereal-diverse country in sub-Saharan Africa. As with all such maps, one (or at least I) longs to plonk the locality of germplasm accessions on top of it. And to know how they relate to other crop maps produced by the CGIAR system.