I spent last Saturday morning wondering around downtown Washington DC with a friend waiting for an afternoon flight. The day was bright and pleasant and we took in all the major sights. Including the National Museum of the American Indian, which is a pretty spectacular building on the Mall.

Apparently, the construction of the museum was partially funded by a large donation from a wealthy Native American tribe in Connecticut, whose casinos are clearly quite lucrative. We didn’t have much time to spend inside, unfortunately, but the outside was interesting enough. And not just for the architecture of the building.

A Native American food garden has been planted along the pavement by the side of the building. You can see maize and squash here on the left.

And also tobacco, sunflower and cotton (below).

Further along the pavement there is a nice bit of prairie, with some particularly important medicinal and other useful plants highlighted. All with very informative labels. A really nice idea. 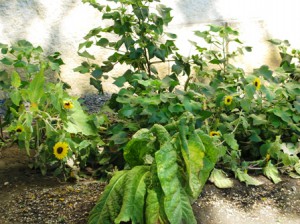 Unfortunately, I couldn’t find anything about this on the museum’s website, so I don’t know whether it is a temporary exhibit or a permanent feature. Anyway, I wonder if the next donation by that Connecticut tribe might be to some of the genebanks which maintain Native American crop germplasm.