Where does crop X grow? Important question. And pretty simple too, no? No! Because just a little looking around yields about half a dozen different answers, and no clear idea of which to trust, or how they relate to each other, or how they were arrived at, or even if there are more.

Here’s what I came up with in only about half an hour of searching. The following are all data for banana/plantains. First, there’s MapSpaM (that would be Spatial Production Allocation Model), from HarvestChoice: 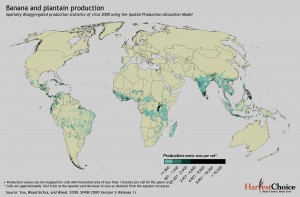 Then there’s FAO’s AgroMAPS, which has some really weird data in it. Try looking at the distribution of cassava in Africa, for example. Anyway, here’s banana, which actually looks pretty weird itself: 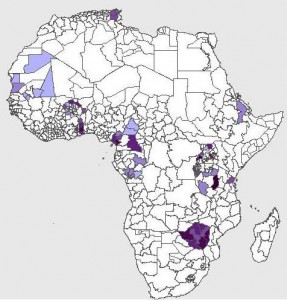 And then there’s CIAT’s Crop Atlas of the World.1 That says it is based on the FAO data, but doesn’t really seem like it to me, at least not on this evidence: 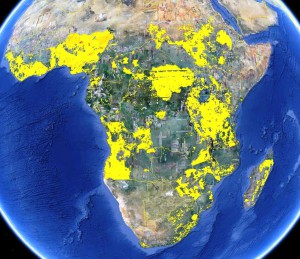 In its time, CIAT has also used the dataset from the Land Use and Global Environmental Change project called “Harvested Area and Yields of 175 crops (M3-Crops Data),” but I haven’t been able to get a map of that.

And then there’s IITA’s banana mapping effort, which admittedly is very much still a work in progress: 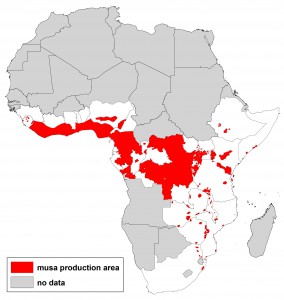 Well, I suppose I could sort out some of the questions I have about all this if I spent a little more time at it. But really, should a poor boy have to? Shouldn’t FAO, or the CGIAR, have all this sorted out by now? Anyone out there want to guide me through this?

11 Replies to “Where do bananas grow anyway?”