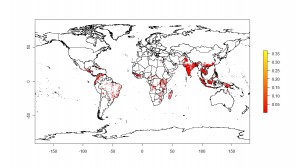 More today on where bananas grow. Or where people think they may grow, anyway. First, let’s tie up some loose ends. Yesterday I mentioned Chad Monfreda‘s dataset from the Land Use and Global Environmental Change project, but said that I hadn’t been able to get an actual map. Thanks to Julian and Andy, I now have. To the left is the result for banana.

And to the right for plantain. 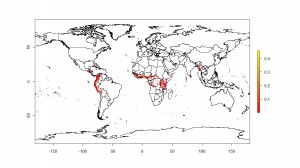 Andy also pointed me to another dataset, called MIRCA2000: “Global data set of monthly irrigated and rainfed crop areas around the year 2000.” Here’s Andy’s pragmatic take on this proliferation of datasets:

You do have information on quality and uncertainties and there is enough info — if you are interested — to work out which to use. I don’t believe that there is a right or wrong answer here, they all try to make the best of what is often very cruddy and incomplete data.

It’s a choice between modelled crop distributions or statistical data or a combination of both. Neither is wholly accurate and like most global data sets, it is best not to look too closely at the results.

4 data sets are better than none right?

Glenn also chimed in with his work for the Generation Challenge Programme, which uses the SPAM dataset I mentioned yesterday. It’s still in beta, so you can’t play around with it yet, but, again, this is what banana in Africa looks like: 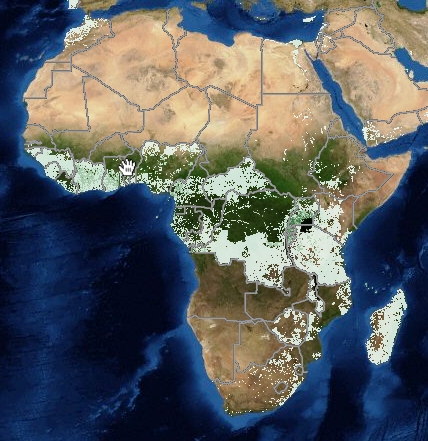 Julian sums it up very well in his very comprehensive comment on yesterday’s post, and I leave the final word to him:

This is what you’d normally expect when there’s no coordination or data sharing among institutions: you end up with several institutions, each one re-inventing the wheel. The public then does not know which source to use.
…
So, you end up with two sources of data: (1) FAO country level statistics, and (2) expert knowledge; two methods: Monfreda et al.’s and HarvestChoice’s; and one visualization tool. Anyone interested in comparing or merging?

5 Replies to “Yes, we have more banana distribution data”