We’re very happy to welcome back to the fray our occasional contributor Jacob van Etten. Don’t be such a stranger in the future, Jacob. 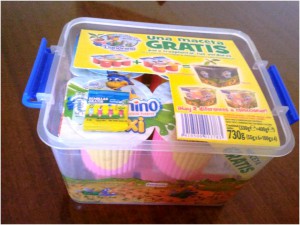 My daughter’s Danonino yoghurt, bought at our local Spanish supermarket, came with a tiny package of lettuce seeds and a nice plastic box to plant the seeds into. In my particular household, the seeds fell on barren ground, as it were, but I think it is a great idea.1

According to the package, Danone produced 300,000 of these boxes with seeds for the Spanish market. I did some googling to find out more about this campaign and apparently it is not limited to Spain. The seeds are also stirring things up in places like Tampa Bay, where the seeds were tried by a playgroup. The blog post on the seeds got 27 comments last time I checked it. This is the very first one:

gabby reid
March 13, 2011 at 9:50 pm
oh my goodness.I grew the plant and it worked my name is gabby reid and i am 10 years old.very mature for my age and did not think it was gonna work beacause usually food makers for kids never actually work. But now I know that danonino can be trusted.And when I see that danonino says somthing is included and it will work and I am sure that people that buy the same thing I got,they will trust you too.

I think that the Danone marketeers can be happy about the effect of the seeds campaign on 10-year olds. (Or they are very good at writing bogus posts themselves.) Apart from that, the seeds also lead to some genuine learning about agricultural techniques. This is another comment on the same post:

Traci Lovelady
May 28, 2011 at 6:31 pm
Just curious… we got carrot seeds & they are growing great, but honestly how are carrots supposed to grow in that little yogurt cup??

Can this fantastic experience be repeated in areas that are more food insecure than Spain and Florida?

I think it could have an enormous impact if we could fill those seed packages with hundreds or different varieties to be tried by farmers, young and old. Now that would boost on-farm crop diversity. The seeds could become the talk of the town, as in Tampa Bay. Farmers might start swapping the packages, or accumulating them to make up a more substantial seed lot. They could try to harvest seed of the varieties they like best, and recycle the seed. They could even become interested in actually buying some seed, if they really liked the variety.

Of course, we would need to work a bit more on the details. One problem would be how to get those seeds to farmers in remote areas in, say, Africa. But here another solution presents itself: use existing distribution channels. Those little seed packages just weigh a few grams, so they can be shipped together with other products. If you can get a Coca Cola to the remotest African village, you should be able to get some tiny seed packages there, too, right?

Well, that may seem like a tired idea, that we should imitate the logistics of bottled soft drinks. But people who are thinking about ways to get medicines into rural areas have some very creative ideas in this area. Colalife (“building unlikely alliances to save children’s lives”) is pushing the idea to put medicines in boxes that fit very nicely on top of the bottles in a Coca Cola crate. 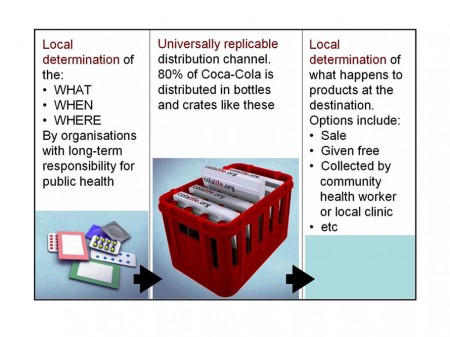 So the question is: can we build some “unlikely alliances” for diverse seed distribution, too?

7 Replies to “Yoghurt seeds and other unlikely alliances”