As promised, here’s my interview with the mother-in-law about her attempts to diversify into tree tomatoes. Which incidentally I gather we should be calling Solanum betaceum rather than Cyphomandra betacea. Thanks to Linda for the cinematography.

Sorry about the rather unprofessional ending. And sorry about the poor sound quality, which is due to the fact that I was using the built-in mike on my camera. In case you didn’t get some of the story, here’s a quick recap. 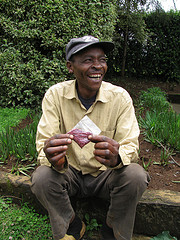 A local guy called Mr Muiruri came by a few months ago with an offer for grandma. Here he is at right with one of the packets of tree tomato seeds he also sells. He asked to plant some seedlings on her land. He would take care of them and then when they started bearing would pay her KSh 40 a kilo. He is able to sell the fruits for about KSh 60 to kiosk owners in Nairobi, who then sell them on for even more. Grandma agreed, and Mr Muiruri duly planted about 80 or so trees in two or three separate parcels on her land. Here is is harvesting one of these lots, which happens to be intercropped with cabbages. He says the leaves improve the soil.

Mr Muiriuri has similar deals with several other farmers in Gataka. He moves among them on foot, carrying the harvest in plastic bags, then makes his way to the main road, which thankfully is now paved, where he catches a matatu to Limuru and then another to Nairobi. It’s a lot of work, but he’s passionate about his tree tomatoes. And other fruits too. He’s got a small nursery where he plays around with new species as he gets hold of them. A true entrepreneur.

Too bad none of them are local. The “nathi” that the mother-in-law mentions towards the end of the interview is Physalis peruviana, a South American native that was introduced to the Cape about 200 years ago (hence the name, Cape gooseberry) and spread from there to other parts of Africa, where it is used for food and medicine. Not that there are no native edible fruits in the highlands around Limuru. ICRAF’s database lists about a dozen. I talked about some of them with Mr Muriuri. There’s not much he can do without seeds, though, and they’re difficult to find. But I like to think maybe the seed of an idea has been planted.