There’s lots of fascinating material in Robert Spengler’s new review paper on Agriculture in the Central Asian Bronze Age.1 This map of the region comes from an earlier paper of his, but sets the scene nicely. 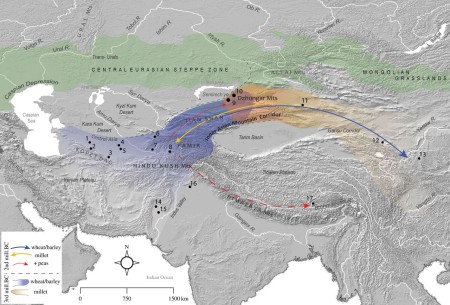 The thesis of the latest paper is that the conventional model of mixed agropastoralism in Central Asia gradually becoming typical nomadic pastoralism needs to be rethought. In fact, Spengler says, after looking in detail at the archaeological evidence, the mixed pastoral economies of the Bronze Age, with their distinctive package of crops derived from both further east and west in place by 2500 BC, actually intensified into the Iron Age. The result was “irrigated agriculture, sedentary villages, and a drastically altered anthropogenic landscape.”

I may come back to that in a later post, but here I want to focus on what I learned about wheat. I knew that the Green Revolution was based in large part on the use of Rht genes from a Japanese wheat called Norin 10. These genes cause dwarfing, and allow the wheat plant to divert energy into the grain rather than the straw. Yields shot up in places like India, and the Borlaug legend was born.

What I didn’t know is that there was so-called “Indian dwarf wheat” in Afghanistan, Pakistan and northern India before the Green Revolution, characterized by

…dense strong culms and erect blades, a condensed spike which expresses with short awns, glumes, and a hemispherical grain. In addition, it has increased tillering and a reduced rate of lodging…

All of the wheat found in Bronze Age Central Asia seems to have been of this type too, as far as one can tell by comparing archaeobotanical remains with herbarium and genebank material. And similar material turns up in sites in Japan and Korea a millennium and more later. Spengler is circumspect, asking for genetic studies, but it is certainly an intriguing possibility that

…pre-Harappan farmers in India bred a phenotype that would later alter agriculture globally.