Back in the day, together with co-authors Nigel Maxted and Edwin Chiwona, I used maps from the Atlas of Common Bean (Phaseolus vulgaris L.) Production in Africa1 in a little thing called A Methodological Model for Ecogeographic Surveys of Crops. I don’t remember what software we used, and how difficult it was to do, as it was getting on for 25 years ago, but I suspect it was a bit of struggle mashing up the maps with genebank accession locality data.

Well, there’s a new edition of the atlas out, and, thanks to Genesys and Google Earth, it’s not quite so difficult (the colours represent ecologically distinct bean production areas). 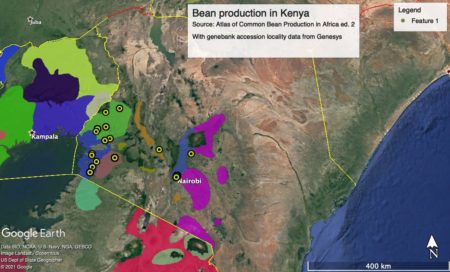 Which is not to say it couldn’t be a bit easier. I mean, why not allow people to import their own data on the atlas’ nifty online interactive maps?

Oh, and BTW, only a tiny percentage of bean accessions from Kenya are geo-referenced, so that hasn’t changed much in 25 years.

2 Replies to “Bean there, done that”