Thinking about biofortification, I imagined a world that relies on fewer and fewer over-utilized crops. When will 95% of our food come from two or three of them? Perhaps a maize-arabidobsis hybrid, a cassava wunderroot, and super-rice? Shouldn’t we rather buck that trend and diversify agriculture? That message comes from several corners, like this one: “a food system that is good for us, our communities and the planet is small-scale, diversified agriculture.” 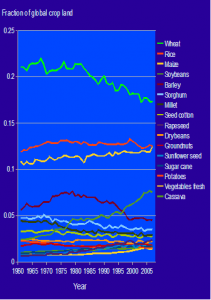 I checked1 the FAO statistics to see how bad things are going. How quickly are we un-diversifying agriculture? If you consider the fraction of crop land planted to different crops, it appears that — at the global scale — the opposite of what I expected is happening. Between 1961 and 2007, maize and soybean area went up, but that was countered by the decline in the area planted with wheat and barley.2 It is a story of both winners and losers, and — overall — an increase in diversity.

Global crop diversity, expressed as the relative amount of land planted to different crops, did not change much between 1961 and 1980, but is has increased since. Between 1980 and 2007, the Shannon index of diversity went up from 3.14 to 3.34.

Do tell me why I am wrong. Is it a matter of scale? Global level diversification of crops while these crops are increasingly geographically concentrated? Could be. Is the diversity index too sensitive to the relative decline in wheat? Perhaps. Or are we really in a phase of (re-) diversification, at least in terms of the relative amount of land planted to different crop species?3 I cannot dismiss that possibility. For example, I have heard several people speak about on-going diversification (away from rice) in India and China. Has anyone looked at this, and related global consumption patterns, in detail?